So, I got those pictures back.

It's Friday afternoon.  Er, evening.  Working late to make up some time from long break for mammogram.  Vaguely pondering which way(s) I might go with a '70s outfit, as it's looking like the chorus will have us dress in individual variations on the theme, for part of the show.  In January.  So plenty of time to ponder.

Just about everybody else is done doing work around here for now.  And it feels later than it is, cuz it's dark out, and the lights have gone out on me again.  The motion detector doesn't see me.  Must be cuz old women are invisible.

So, yeah, the other day I got back the pix from that camera I found in the back of the piano.  I got 'em out into the car and took a look.  The first one was of Holly's sister, at a table in a floral/Hawaiian print shirt.  Then a bunch of partying, dancing and swimming members of that family, plus Olja, also kind of luaued.  I'd forgotten Holly'd taken Olja to Ohio and I didn't come with, perhaps pointedly not invited.  It may have been an anniversary party for Liz and Bert, before he got prostate cancer and dumped.  They're dancing in a couple of oddly staged shots.  Liz is Holly's mother.  Here's a shot that seems a lot like her: 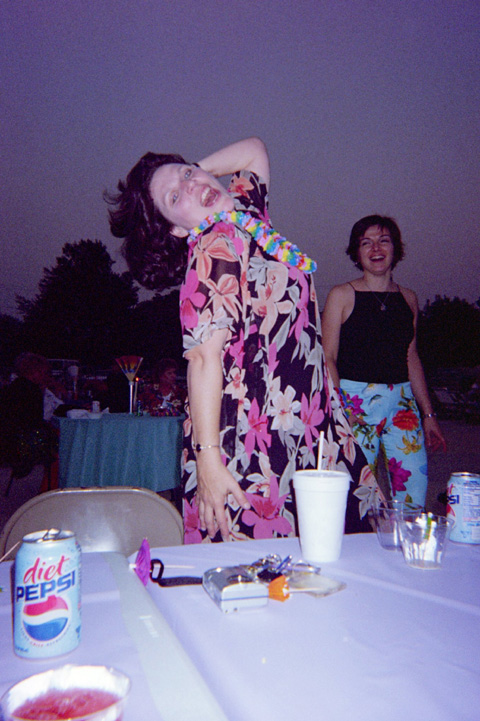 Then the rest of the old ones are from the early stages of moving in to the house.  I have pictures on my work computer of the floor refinishing just before that; these show boxes and furniture, and my old cat Chester. 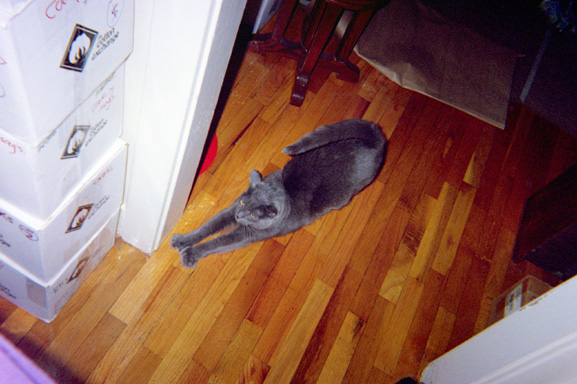 The next morning (the morning after looking at the pictures, not the morning after 2003) I was thinking how I came into that place with a lot of old stuff, drug along from the past, and some of it still not dispensed with.  But I'm dealing with it.  And a lot of it I have dealt with.  I dunno.  It hit me in a way that was quite sympathetic to myself.  This is good.

Finally, there are the few shots I took this fall to use up the film.  My dog.  (My) Bert in his Piggly Wiggly shirt.  Bert in his Piggly Wiggly shirt and my dog.  The one from when I dropped the camera, which caught the racing-stripe duct tape I use to hold the weather stripping more-or-less in place in my car door (after multiple gluings and re-gluings).  And then this shot, out front at my place, which is the best of the lot, its colors pink-purply distorted by the aged film, looking like a painting: 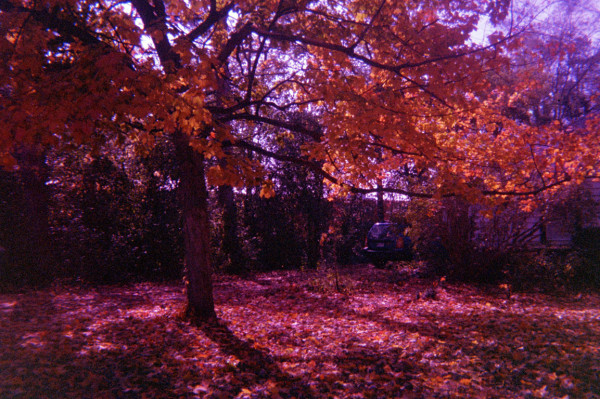 A time capsule is a fun thing.  Especially on the later/opening end.
Just having glossy prints of pictures in a little paper envelope thingie is like being in a time warp right there.