Bert just came in to tell us that the Russian term for kissing numbers is contact numbers (only in Russian).  We are more romantical, I said.  After trying for a Tits joke that didn't go over.

Now he's telling Kerri how he made a salad for the neighborhood potluck this weekend.  I made one too.  I made a fruit one.  A simple fruit one.  I don't even know which salad was Bert's salad.  There were a lot of salads there.  It was salad-crazy.  I had leftovers from the sampling I took home for all of yesterday's meals.

Hey, Bert, which one was your salad?

The one with the sugar snaps and radishes and ricotta salata and mint.

Mine was blueberries and nectarines.  It's very simple.  Here's a picture of an earlier version of the same pairing: 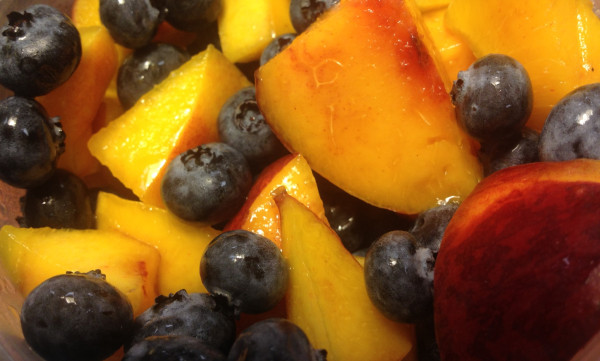 Hey, I almost forgot it's a voting day!  If I hadn't seen Bert's "I voted" sticker just now, I'd have forgotten to stop and plunk down my two cents' on the city council.  Phew!
Subscribe