It's sort of amazing, but here just a week after I said goodbye to Mo, I have a new friend who needs a name.  My friends found him in the communal cat room when we were there Thursday after work, and he is an absolute lovebug; I put him on hold and scrambled yesterday to get a space ready for him, so he and the Manster can take their jolly good time becoming a blended family.

Finally a few minutes ago, after a good spell of early-afternoon lovin', the new guy decided he didn't have to be touching part of my body, and took at bath on his bath towel bed and settled down for a nap: 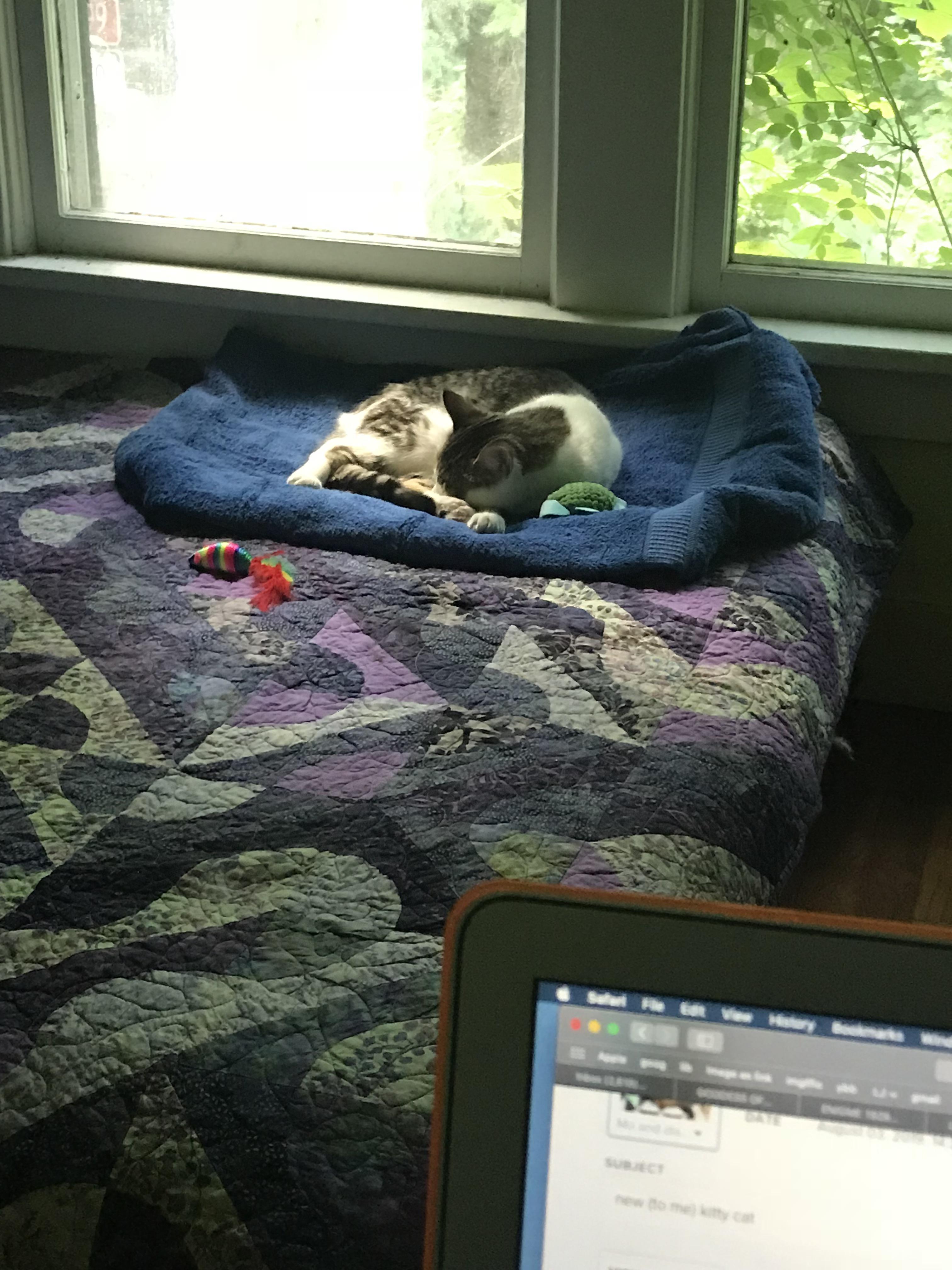 Now he's already come over to see if he can help type, and then jumped down to eat some kibble.  Such a functional cat!  Lookit him go.

So, he needs a better name than Gunner, his shelter name.  Perhaps that name is related to how they got hiim:  someone saw him flung from a car, out at a horse farm.  He's so sweet I imagine it was the shitty boyfriend of someone who loved him, cuz how the hell else that could happen, I can't fathom.  Anyhow, a flyer name would work, for that reason.  But I've already used "Amelia" for my kite, and Lindbergh was a jerk.  An astronaut name?  Maybe.  I could use "Gus" since the buddy who was gonna call hers that didn't use it after all.  Or maybe another.

Since I've had him home I notice that he keeps looking up, even if he's up on my shoulder already.  This made me think of an old PBS astronomy series, like 5 minutes long, that used to play at the end of the programming day, which there used to be such a thing as.  The host was an affable dork named Jack Horkheimer.  But, geez, "Horkheimer" is rather a name, you know?  His middle name was Foley, and the foley effect factor would jive well, cuz not-Gunner makes a lot of interesting sounds, but I'm not so nuts about "Foley" as a name.

Speaking of nuts, he has had the kind of neutering that left his big ol' testicles there.  Bigger'n my ol' boy Chester's.  I don't have particular feelings about testicles one way or the other, but I do like balls of the bounce and play-with non-body-part kind.  That would open up the world of sports, to riff on that.

I hit on "Buster" the other day.  It'd be sorta ironic cuz he's not throwing his weight around like some old Buster in the movies, or it could be Buster Keaton-y.  But then I remembered Tierza's cat was (is?) (I think is) Buster, and so it didn't feel original any more.

"Guthrie" is a name I like and have in mind for a pet someday, but not-Gunner doesn't seem like a Guthrie.  And "not-Gunner" is just not gonna cut it.

He also seems optimisitic, in the figuratively sense of always looking up, chin up, etc.  I ain't callin' him Marianne Williamson, though, that's fer damn sure.  Sure, it's cool that she's in debates saying goofily real human things, but she's also been a horrid fatphobe, so screw that.

So we're gonna be hanging in there a while on this one.  Meanwhile, I now have to light some fire under me to start dealing with all the stuff I took out of this room and have lining all the other spaces of the house except, like, the bathroom.  It's been a long time since it was a nursery, or guest room, or roommate room.

If I keep it like this I can do foster litters again, easy-peasy.  Once these guys are both run-of-the-house.  O for the day I find them napping with their butts touching.
Collapse