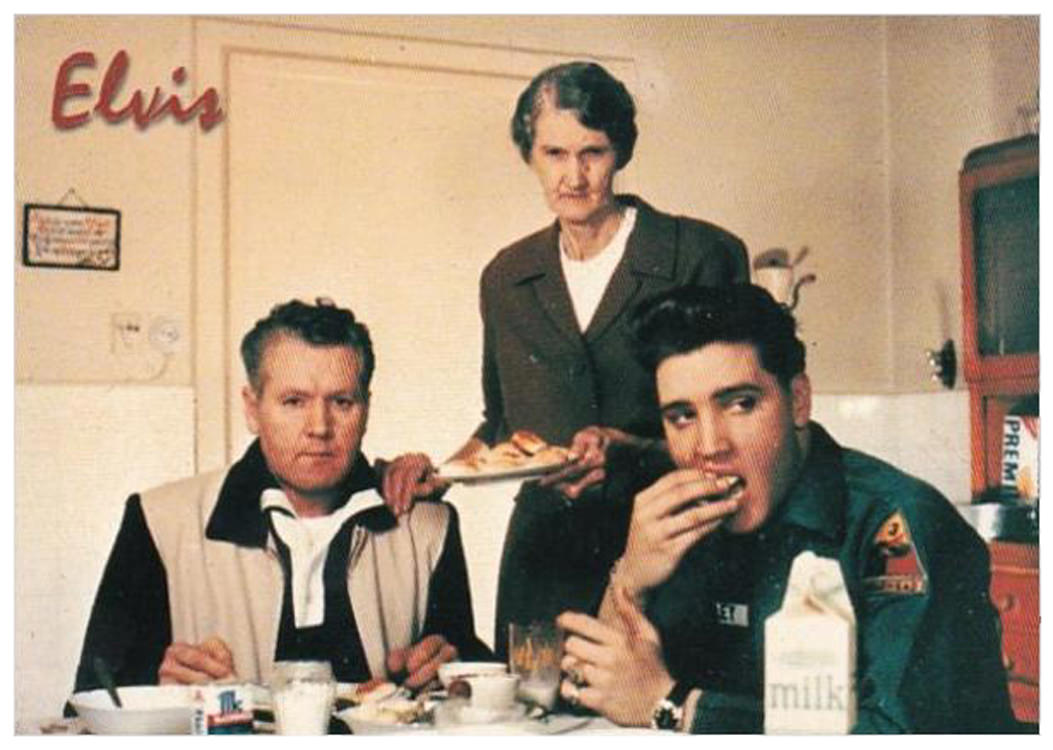 Elvis Week concludes with this card of him, his father, and his grandmother.

I do remember it was dark out.

I'd gotten a ride from my brother, who had a car at 16.  It wouldn't be okay for me to have a car until I was in college, on account of how dangerous it supposedly was, "out there", for girls, in our own cars.  But it was okay for me to have to ride with him.

And yes, I could tell you exactly what his friend did to what specific parts of me with what specific parts of him, and in order, while I tried, and failed, to fight him off.  And I could tell you, at great length, of its legacy with me, and how, among other things, it both ruined my joyful imagining of future pleasures and diminished my experience of them; further fucked up my already complicated emotional life; and reinforced my impression of the shittiness of the world.  And I know I'm not even aware of all of its impacts on young me.

I don't remember what happened right after it ended, or what made him crawl back to the passenger seat.  I'm pretty sure he'd been drinking beer.  I have no recollection at all of the hours afterwards for me, but I do know that I never for a moment considered telling anyone about it.  Like other experiences in my childhood, no contemplation was needed at all to know that it wouldn't do any good to tell anyone.  It was quite possible no adult would believe me, and more possible an adult not wanting to have to deal with it would instantly take the stance of not believing me.  It was also almost certain that, if somehow I were believed, it wouldn't matter.  Nothing would happen.  And then it would be worse, because I would have to deal with that pain as well.

I don't know whether I was 14, or 15, or older.  But I know he was two years older than I, and I know he was my brother's asshole friend, and I know his name was Barry Hoppert, and happily now he apparently is living in Florida, where he owns a transportation service, has children, has been divorced, makes over $150K a year, and is registered as a Republican, but ISN'T on the verge of being annointed for life a Justice to the highest court in the land.

I tell you this, the few of you who read here, just to tell one more story, for the sake of telling it, because it's true, whether anyone believes me or not.
Collapse