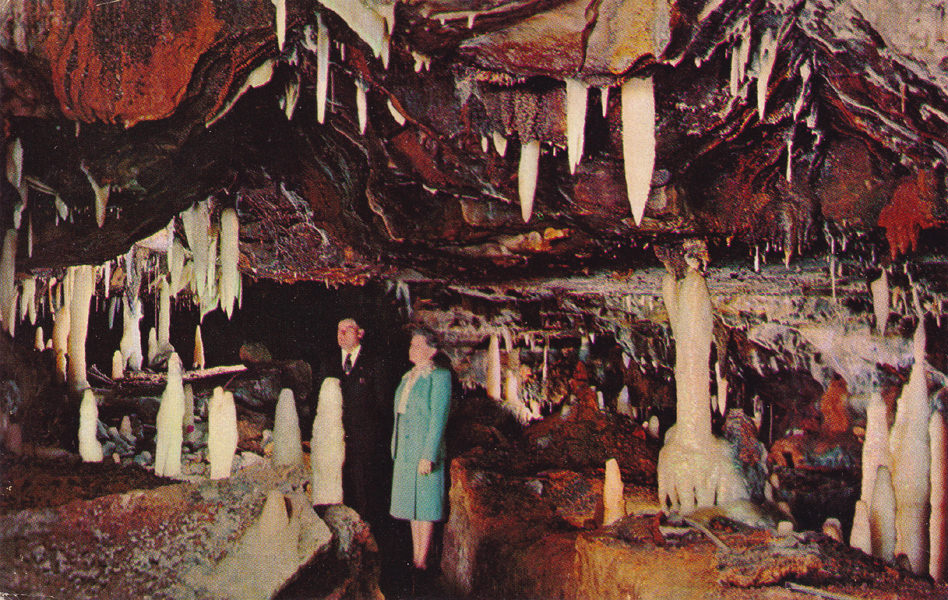 I like the way people are props in these old cave postcards.  For scale.  But also giving us a little flavor of the culture and the times.
( Collapse )

Dog barfed today, and her other-end digestive troubles continue, off and on.  Might take her to the vet soon if she doesn't get over it on her own, quick.  Meanwhile I keep an especially vigilant eye on what she's up to (eating).

Yesterday I was behind a car with a style of Maryland license plate I hadn't seen before:

When I lived in Kansas I pretty much never saw a Maryland plate.  Same with Georgia.  I rarely saw one on either of the big contiguous-48 drive-abouts I did, either, for that matter, once I was two or three states away from home.  Made me think Marylanders never go much of anywhere, at least with their cars.  But Ann Arbor has some Marylanders in it.  I probably see the car of one every few months, at least.  When I do, I start singing a cheesy promotional song about the state from back when I lived there:  "Maryland you are/Beautiful, you are/Maryland, you're taking my breath away....."  Bad song.  But whatcha gonna do.

I'm probably from Kansas, if I'm from somewhere, but I feel like I'm from Maryland.  I lived there from age 10 to age 35 or 37 or something.  I lived in it in different parts and different ways.  I was first sorta on my own there.  It's strange for me to think how far away that world is to me, and how gone.  I was thinking about that a lot yesterday.

At night I saw Lady Bird, which was good.  I'd heard it's a fresh version of a not-fresh genre, the coming-of-age film, but it's a bigger film than a slice-of-transition niche thing like that.  And it has heart.  Plus it's well made.  It does film things well, and efficiently without skimping or being choppy.  There were a lotta moments I liked, but maybe my favorite was a Maryland reminder it offered me.   (Small spoiler follows; just skip the rest of this paragraph to skip it.)  Mom sez to daughter at emotional moment in car:  wanna do our favorite Sunday thing?  Daughter sez yes and we get ready to be shown what that thing is.  Cut to a brief sequence of shots of them at open houses for houses they could never afford.  Once in the '80s my mother visited me in Baltimore, and---her idea---we spontano-dropped-into an open house for a $450,000 house, which is probably worth twice or thrice that now, in Roland Park.  This was unlike my mother in more than one way.  And I loved it.  I remember her asking the real estate person, as we stood on some big smooth wood floor, "Full basement?"  Yes, it had a full basement.  Then mom said something about good, she likes a full basement, which nearly cracked me up, with her full basement *maybe* the square footage of the kitchen we were in.