I rewarded the dog for her patience with me being gone for such long stretches with a nice last-hour-of-daylight romp at the dog park tonight.  She's snoozin', and I hope to be soon.  I still don't get it, how sitting and watching lots of films a few days in a row can be so tiring.  But I made it to all of them, plus watched the one this morning on TV.  Eddie himself, our host, with whom I had a few conversations this weekend (and who kept remembering my name, impressively enough), couldn't watch his own show this morning cuz his hotel doesn't get TCM.

Turned out I hadn't been to the Redford Theatre before.  It has that old-everyday-movie-house elegance, in its case in a sort of "Oriental" theme, with reds and oranges and such, and women in kimono-lookin' garb appearing in the decor in many spots.  On the deep blue ceiling are "stars" that light up and twinkle, gently, during the films. 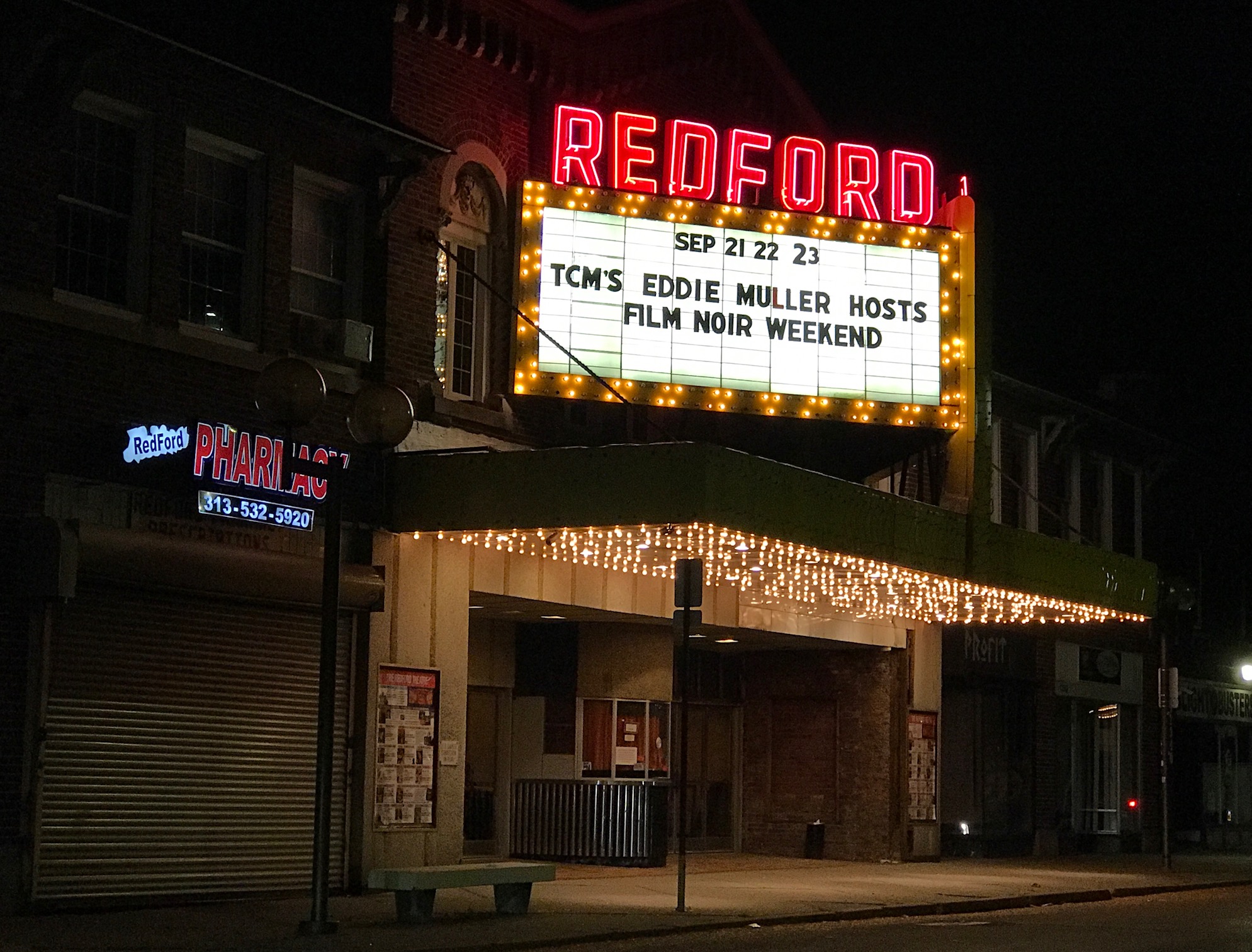 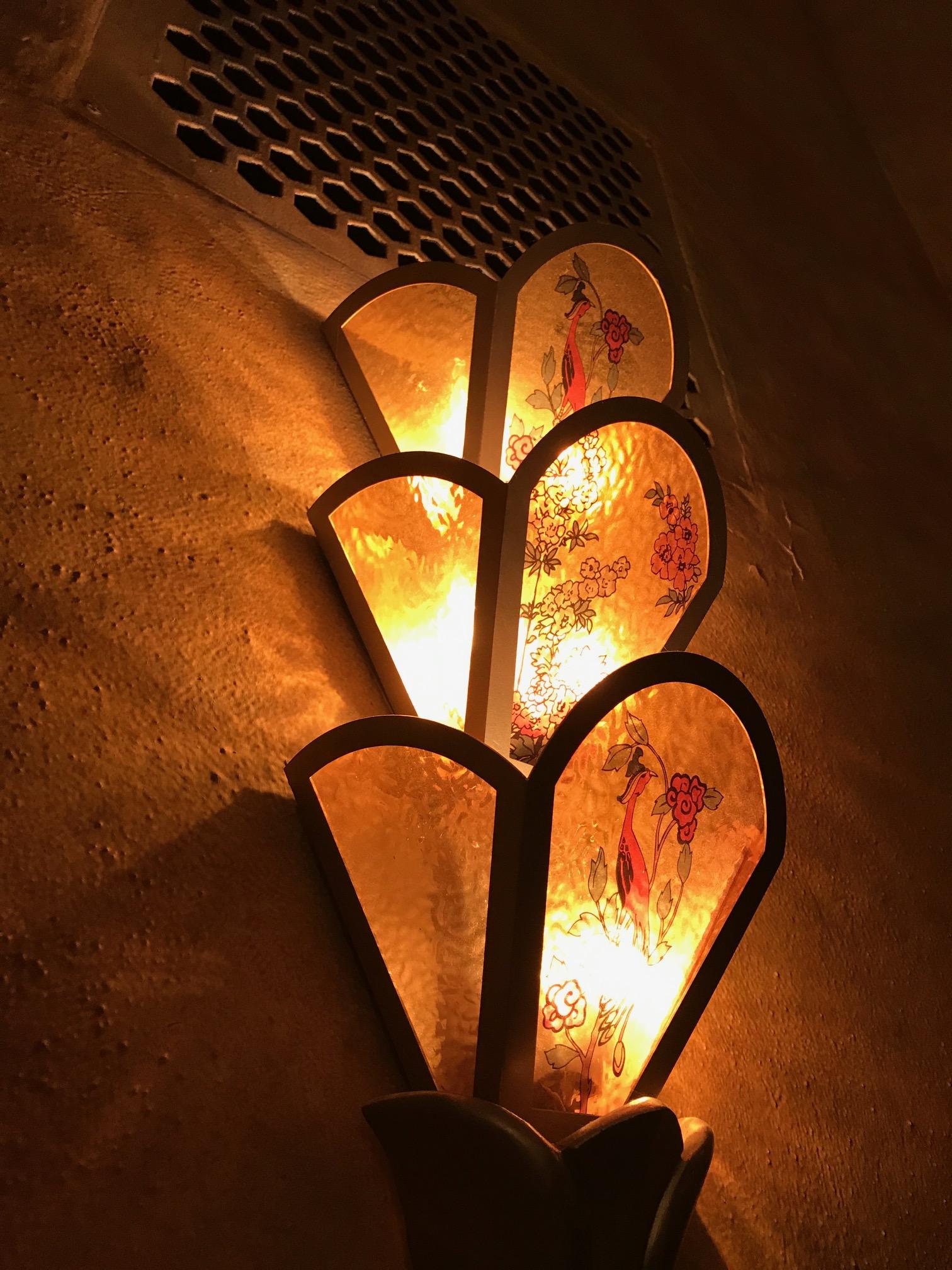 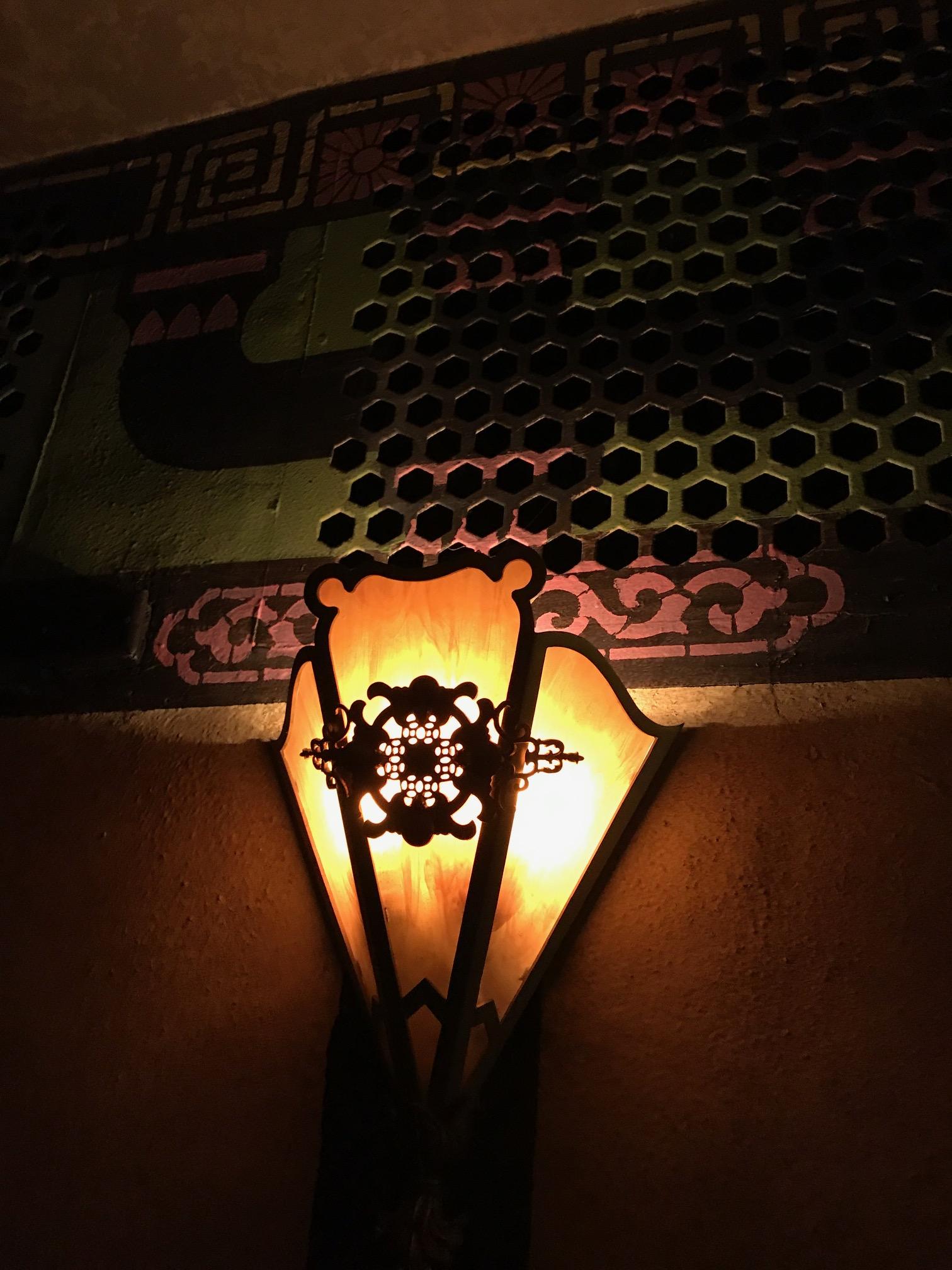 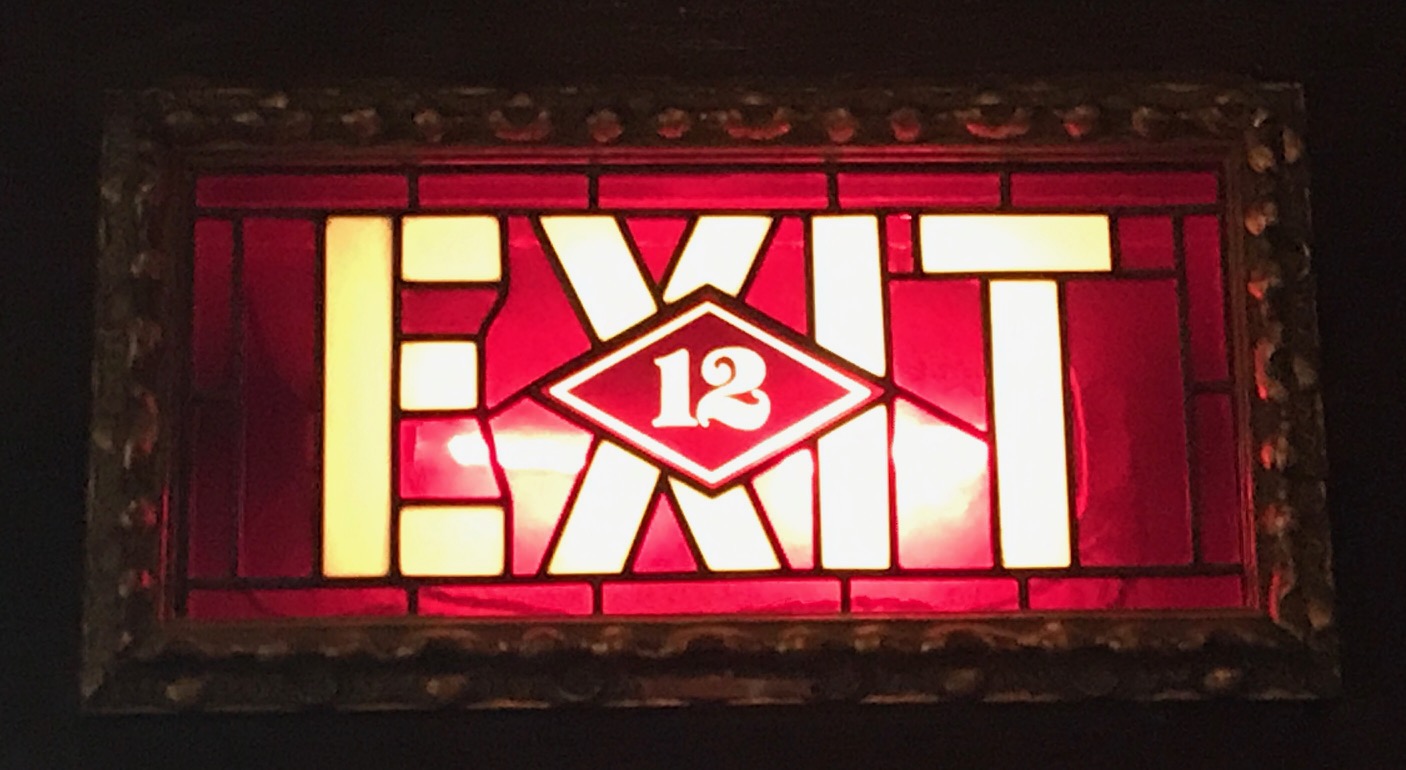 It was refreshing, in a funny way, how the theater isn't all shiny and just-so renovated, as the (more local) Michigan Theater is.  They're collecting donations to finish renovating the ladies' room, which needs a ceiling over the stalls, plus some drywall, and I was itchin' to explore some of the non-public areas, see what's stashed away and atmospheric there.  In a few places on the walls of the main floor, the plaster or paint is peeling.  The balcony's in pretty good shape.  But there's a way the being in the building reminded me of the Charles, in the old days in Baltimore, or even old Comiskey Park, or the old Tiger Stadium, visited before they were torn down--- you can feel the worn like-it-used-to-be delineation of time in the structure and the surroundings themselves.  This business seemed right, to me, for a film noir fest--- elegant and tawdry, all at once.  Tired but trying, while it's clearly been through a lot.  And it feels a bit like my grungy, not-rich old Baltimore, those few blocks around there, too.  I liked that.

Another refreshing less-than-pristineness was seeing all the films on 35mm prints, crackling and spotty, a little jumpy now and then, and often differing in visual quality from one reel to the next.  Before the last show (one of two I hadn't seen --- Cry Danger, 1950, Dick Powell, actually funny in places, and making me want to go hang out at the LA trailer park in it the way I want to go live in the Patio Apartments every time I see In a Lonely Place), the local guy thanked, among others, the projectionists, and Eddie said he guessed that guy didn't know the superstition that you never thank the projectionists until AFTER the last screening.  Then, sure enough, in that last screening, something went wrong.  Some strange audio wobble.  So they stopped the picture and we saw this for a while: 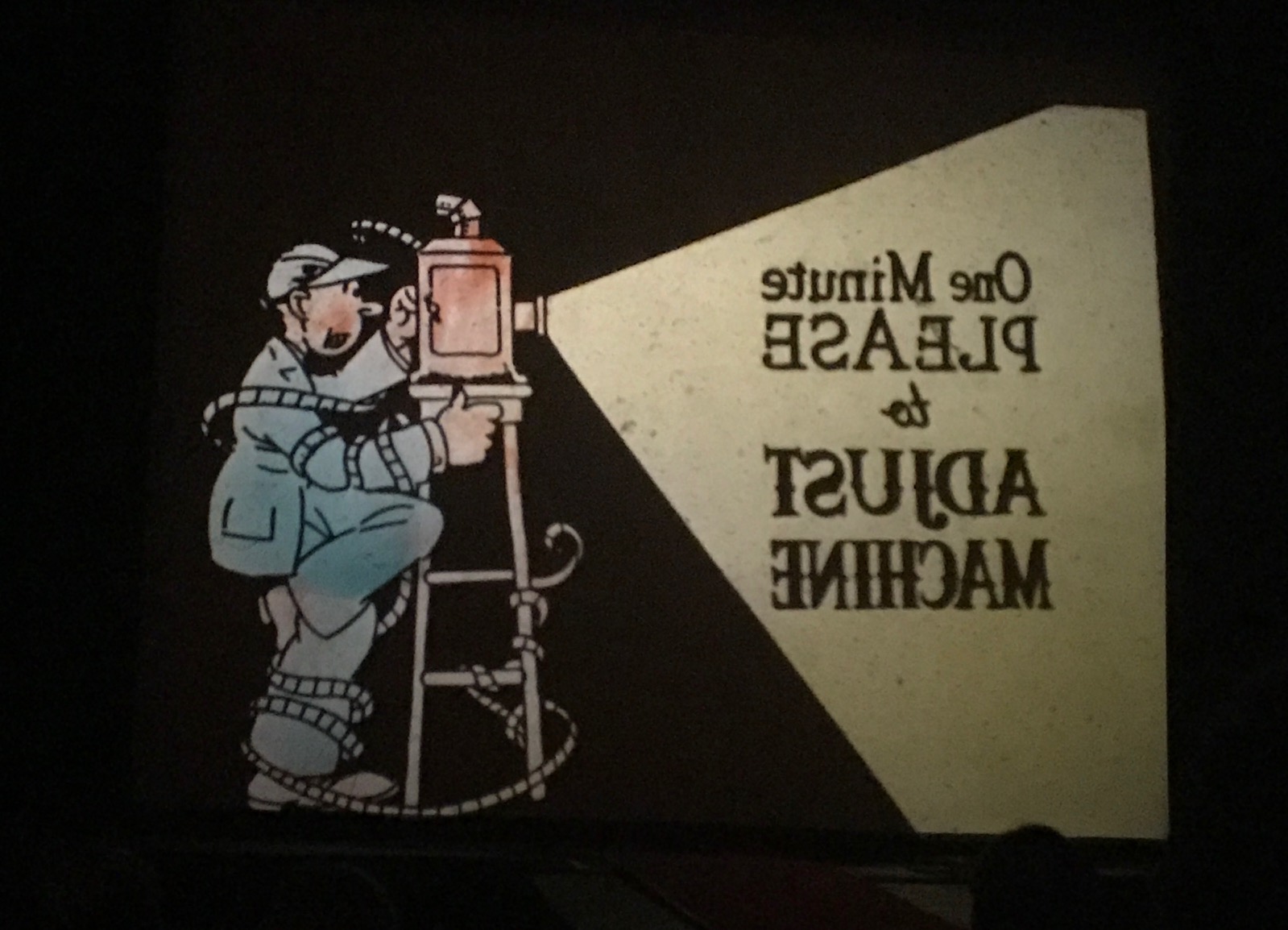 At some point watching these prints on film, I got to thinking how I'd really like to see a screening of a nitrate print of something (preferably something I like a lot).  So I have that on a bucket list.  And that means I now have a bucket list.  I contemplated what item 2 could be, but didn't completely settle on the next thing that came to mind.

Last night my unconscious entertained me well too, and had me wondering whether its presentation was influenced by all this hard-boiled darkness and interpersonal intrigue I was in the middle of taking in, with the festival.  I awoke to yet another realization that I still dream about sleeping with someone again---- someone who, this time, was moving stuff into her new digs, where she was telling me about some of it, perky-happy to be starting anew, as we celebrated being in each other's company, and that we'd be spending a lot of time there in this space.  I was into it, too, though I carried with me all that I know.  She led me over to the little kitchen area and gently pulled me down with her to the floor, where, just as I was lowering the front of my body down to meet hers, I saw that her face was suddenly covered by a mask.  It stopped me, and startled me, and I woke up, and as awareness of the dream began to spread in my semi-consciousness, I made sure to stay still and not think too much, so I could play it through before I lost it forever, and feel what was left of it as much as I could.

I'm not ready for a full workday tomorrow, plus chorus.  I feel like I need another weekend to recover.