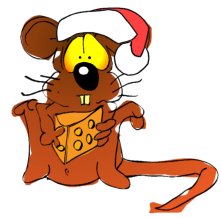 Was it murder?  Suicide?  You get a lot of suicides this time of year.  It could even have been natural causes.  Hard to know, when the body has yet to be found.  But there's no doubt about it:  the Christmas mouse is dead.

Professors Naz Trills, Ol' Factory, who've been working jointly some 50 years and have held the position of Chief Sniffers of the House for over a decade now, immediately sensed the demise upon their awakening on Chrismas Eve day.  "Ew," quoth they, "What's that?"  It didn't take all their years of expertise to know that something most foul had occurred.  Indeed, during the night, not a creature had been stirring, and the one stirring the least of all was that now ex-mouse.

It soon became the urgent concern of all still alive and present (except the dog) to find the body and perform the appropriate rites of passage.  But despite extensive searching, no carcass was turning up.  Granted, the townsfolk took many breaks from the scene.  And who could blame them.

To this day, the investigation having explored almost every nook and cranny accessible without a sledgehammer, the ever-diminishing shell in which C. Mouse experienced this life has not turned up.  Experts differ on the predicted timetable, but the residents are hoping for a rapid decomposition; if what was once a living, breathing, scurrying beady-eyed loner soon becomes a pile of few dry bones topped with a red-and-white felt hat, the chances will improve dramatically for what has been wished:  to all, a good night.
Collapse