Thought I saw movement down there around midday but decided it'd been my own shadow. Then this evening, in the further-back basement room to un-pop the circuitbreaker, I heard movement back in the other. Looked back & there it was, walking away from me.

I think it was a duck. It didn't quack like a duck, but it sorta walked like a duck. And it did look like a duck. I didn't get a long look before it disappeared from view; by the time I'd found the flashlight & my courage, it was nowhere to be found.

I'm figuring either (a) it got out however it got in or (b) I'm seeing things.

But there IS that thing about if it looks like a duck.


Coincidence was out on the town last night, making it look like the Universe had something to say to me. Really Rosario was the prime mover, suggesting Lila Downs to begin with, and then leading us from there. But it's easy to imagine the Fates were up to something.

Isabel Allende was on public radio this morning. Half-awake, I heard her talking about letting spirits live with us. She was speaking of her dead daughter, who doesn't appear to her as a ghost but lives in her heart (and is, thus, with her), and of her (also dead) mother, to whom she writes a letter every day. My heart swelled with jealousy.

She went on to speak of the realistic as what we can explain, trying to have control. And that life isn't so down with that.


Just moved the laundry again. "Human in the basement!" I call out, as I go.

Finally installed the new dryer vent duct. The tube thing. Is that a duct? Looks like a duct... ha ha ha haaaa.

Think I'll take some days off work to futz about the house. Sure could use it.

In case you missed it,

peteralway, inspired by my last post, has composed the goofily ominous A Duck in the Basement (.mp3).

And now I'm having the adrenalin rush, after the deed is done. I was all steeled to do it. Phew!

So, let's see... I'm home for maybe 10 minutes, petting the felines in the living room, and we hear this quack. The cats look at me; I look at the cats. It mighta been outside, but it might not. And with the duck I've been having lately.... ooooh. I know. It's just too tempting, guys.

Down to the basement with the flashlight went I. It didn't take long. Behold:

There really was A Duck in the Basement. Can't see it well in the picture, but there's some blue on those wangs. ("C M Wangs? L I B. M R Ducks!")

Back upstairs I went for long sleeves and gloves---I don't know whether ducks bite, but I could get quite a rep showing up at the ER again already, bitten this time by waterfoul [sic]. I aim to be an eccentric about town as my life in Ann Arbor goes on, but not for something like that. That'd get old fast.

I moved the old bedframe & rug blocking the back door and opened it & propped open the storm door (optimistic, but prepared for the best), and, gulp, here we go, let's see what I can do. If I blow it, maybe there's a wildlife rescue I can call. There was that amazing sexy woman in Bowie who did that. Perhaps she's moved to southeast Michigan . . .

When I'd turned on the lights in that basement pod & moved the gigantic painting of Hamlet being a shit to Ophelia while Claudius and the soon-to-be-run-through Polonius eavesdrop from behind a screen, the duck still hadn't moved. Probably weak, I was thinking. Who knows how long it's been down there. But when I lifted Holly's wall hanging that she hated but I didn't and started to move the box the CD player came in, scared weak duck got the gumption or wherewithal to skedaddle. Or awkwardly shuffle off, or some tempered duckly perambulation verb.

Soon enough it'd made its way through the tails of the dry cleaning bags on the hanging clothes behind the door to wedge its face against the wall, where some board I didn't realize was even there was quite possibly blocking further egress. That was my chance. As I picked it up, hands just below the wings (I'd been hoping to hold those too), it fluttered. I had been talking to it before, some, but now the (pointlessly [unless you count for my own good] verbally) soothing Lisa really kicked in, along with the business-like Action Jackson I have a surprisingly strong one of in me. About as efficient as you can get with a calm demeanor, I got us out along the path I'd cleared and up the stairs to the cold night air. Kinda dark, but here's a shot of the just-freed one: 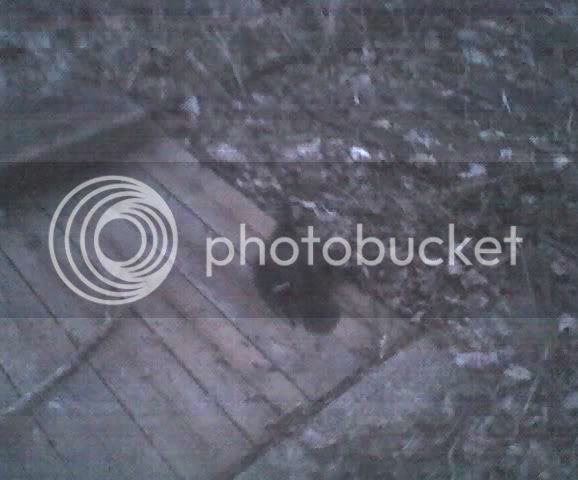 It may be injured as well as weak, I realized when it didn't fly off but flapped a little and walked off under a bush. Maybe some wildlife rescue would have been better. I dunno. We'll hope the best for the poor thing, who at least doesn't have to be stuck in the dungeon of laundry any more.

I had no idea how tightly I was holding my muscles until that bird was outside and I came back in & it started to let go. Man. My neck is crazy. Thinking it'd be nice to have a tiny bit of help onhand for that. Or a backrub buddy in the room, or, as long as I'm wishing, a good-massage-giving lover who really appreciates the release of a good duck.