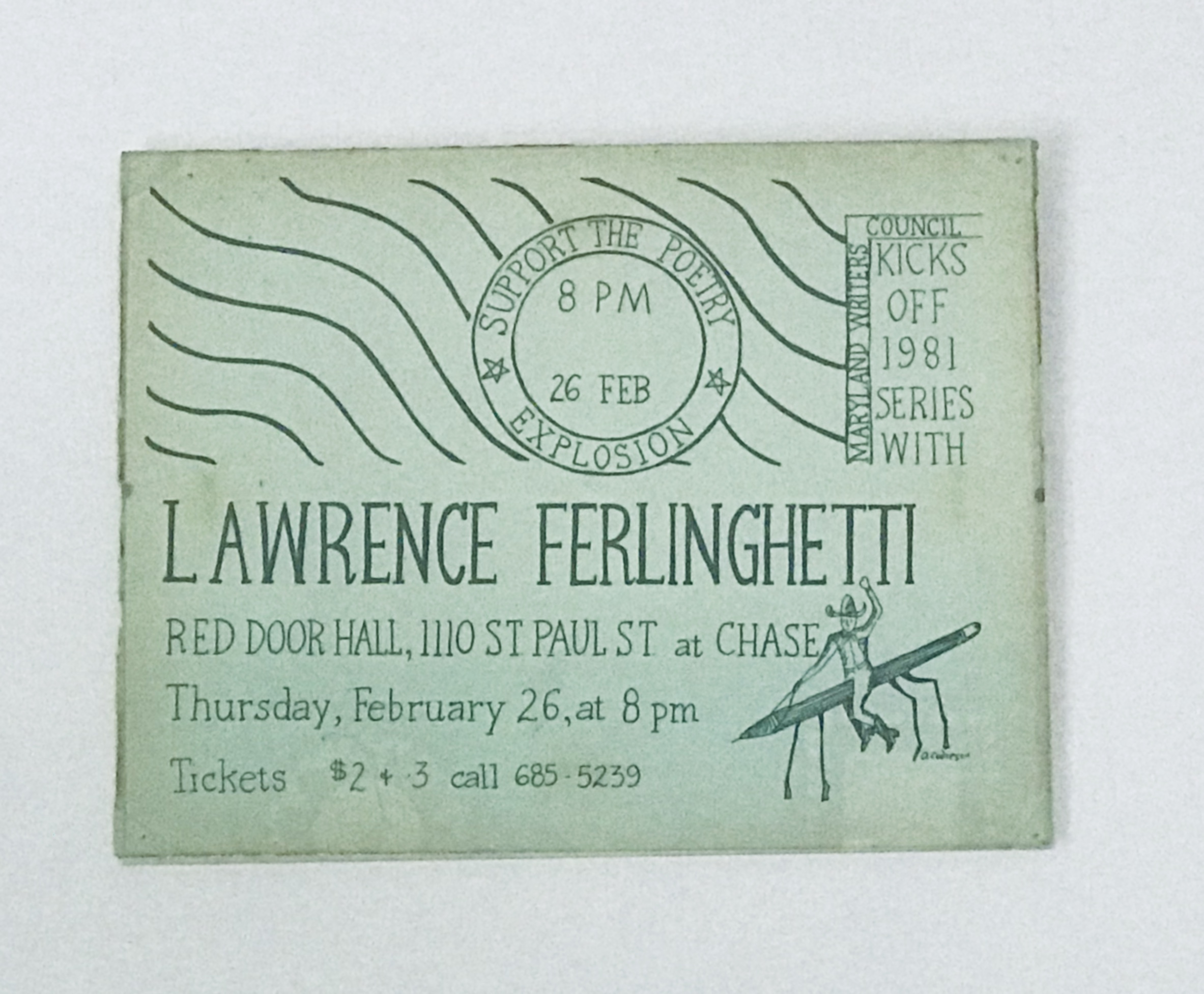 So that guy a couple of days ago in that postcard with Ginsberg was Lawrence Ferlinghetti.  He'd just died.

I'd already had him on my mind, having caught a glimpse of the spine of one of his little books, Back Roads to Far Places, on my shelf the other day, and thinking I might pull it out, though I rarely look at books any more.  You could even say he was on my mind when I posted that card from Coney Island, given that what he is best known for, besides the bookstore I've been showing postcards of, is his book of verse that crossed over into broader popular culture.  A little like when people I knew who didn't read fiction were nonetheless reading The Color Purple, people who didn't so much read poetry still often had read, and even had a copy of, A Coney Island of the Mind.  If you're vaguely curious about poetry, it's a fine volume to crack.

If I weren't including Harvey Fierstein in my twitter feed, I might not have yet heard the word--- as he put it:  "Ferlinghetti gone."  The guy was 101, so no spring chicken--- and maybe he didn't exactly call it in the famous poem in which he says, at the end of the world being a beautiful place if, that it's right in the middle that along comes the smiling mortician, for it was surely closer to the end that it happened to him.  Although when it happens, of course, it's the end, whenever.

I was glad to know the news, vs. finding out months later, but it hit me as these things hit folks sometimes, and my day was immediately derailed.  I wrote my boss and my second/assistant-me that I would be in and out at best, and apart from a long voice meeting in Discord with the IT head, I mostly took the day to read and feel me some Larry.  Best reason for a holiday I'd had all pandemic, really.  Somehow.

My first thought about this post was to write it in the style of a Ferlinghetti poem.  And maybe I'll do a Ferlinghetti-type poem soon.  But what I have is a narrative I want to tell bits of, from that night 40 years ago, which was also the birthday of the first woman I'd sleep with, a few months later.  And I wanted to give you more narrative than would have been in the poem.

I was just over halfway into my freshman year at the little liberal arts college where I was learning about people and ways to be much more assiduously than I was literature, or German, or European White History Survey, or 2nd semester Calc I, or I think Opera, that semester.  That year was to be the last for the old house that non-freshman campus writers lived in, with the long narrow bathroom replete with undergrad-brilliant graffiti, and the "academic football" (touch) the writing prof led in the yard.  My eager freshperson writer fellows and I were very into that subculture of the school, though.  And that late winter night, after dinner, my crazy pal Terri came to find me, out of breath.  Ferlinghetti was reading in Baltimore, and some of the writers were going.  I'm pretty sure we ran to meet them and get in on the venture.

They'd procured an old beat-up brown stationwagon from the school's motorpool, and once we'd piled in and hit the road for the 2.5-hour drive, all the girls in the back and the 2 guys up front, I mostly remember swerving back and forth while our driver tried to get a feel for the bad wheel alignment, the shotgun guy randomly throwing various snacks back to us, and a soundtrack of Rust Never Sleeps (which I'd later get a copy of), with the likes of "welfare mothers"--- my my; hey, hey.  At some point we must have had the radio going, though, cuz somebody excitedly pointed out Nabokov was in that Police song.

The next thing I remember was walking up to the giant red door to the chamber of aesthetics that was a good chunk of an old stone church in Mount Vernon, the downtown neighborhood I'd live in myself in just a few years, on my own for the first time, with my girlfriend, in "the city".  And inside--- oh, the people!  It was the strangest feeling.  It was like I had found my people, or some part of them, but just didn't know how to talk to them yet, or how to be in among them, really.  I'm not sure I ever fully learned that, but I have taken solace in them, as I did then, with a sort of appreciation I didn't even know existed when I was a kid.

My favorite of those folks that night in Red Door Hall was a girl who'd somehow climbed up to take her seat in a stone arch windowwell on the right side, about 3/4 of the way back from the podium/altar.  She had two very long braided pigtails, coming out from under a leather pilot's hat, with goggles.  Was there stained glass behind her, or do I just think of it that way now?  Dunno.

The other best part was the ladies' room.  Once I discovered sleeping with women, the ladies room would sometimes have a special harem-magic in a way I'd laugh about, but that night was the first magic ladies room.  Such a bunch of quirky female-type people in there.  NONE were in the mirrors with make-up.  Two were making out.  Reefer was in the air.  The attire was punk and camp-fancy and hippie and colorful-eclectic and I don't even know.  Was this a version of the adult world?  Why didn't I know about it?  It sure wasn't on TV.

The reading itself I don't much recall.  I suppose I settled into its familiarity with some comfort.  In my short college career I'd been to quite a few readings, after all.  And the guy could hold an audience.  My most vivid recollection of Ferlinghetti that night was after the reading, folks milling around, when Kirk Folk, the blond Jesus-lookin' guy who'd driven us, reached into his blazer pocket, took out a half-smushed Twinkie, and, calling it a gift from middle America, presented it to the poet, who took it gladly, and put it in his own jacket pocket, as if it were just the kind of thing some listener to poetry might typically do.

Before we drove back to our little college town, the senior writers figured we ought to take advantage of being in Charm City to go down to the inner harbor---developed, but not quite to the extent it soon would be.  Inside the pavilions with closed businesses, we took turns going up the down escalator, and then Kirk and Nick jumped onto people's tied-up boats, while the girls and Terri and I stood off to the side, vaguely hoping they wouldn't get arrested.

It was quite a night.

Turned out it wasn't a slice of life I could later run off to be a part of, ongoingly.  When I got to the city, it was queerness and intimacy and a friendship cluster and the rudiments of making a living that I'd be negotiating.  Along with a girlfriend who didn't want to be a lesbian.  That was a lot.

You can maybe get, though, why, when I found it many years later, I stuck the poster for the reading that I'd grabbed off a phone pole into a cheap frame, and have kept it around.
Tags: poetry
Subscribe