Back at my little liberal arts college, a big annual event I never attended was George Washington's Birthday Ball.  But at least once while I was at that school, some less game-for-the-official students held a(n underground) Black Hearts Ball.

Some years later, living back in my sort of original home town in Kansas, I borrowed the idea for a party theme, and my then-partner and I threw a sense-of-event shindig.  She was quite the enthusiastic host, and we went all-out, decorating the basement of our half of the rented duplex in black draping (garbage bags, partly, I wanna say), the futon with the leopard bedspread, I don't even remember what-all, a designated/delineated dance area (with rented disco ball, I seem to recall), and a giant rented silver punch bowl fountain with (was it?) strings of metal beads the drink would flow down.

We dreamed up ways to make the party have a certain mystique, like having folks come around back to enter, at a door that led directly to the basement.  And we agreed that the only way we'd invite people was (a) in person, (b) without actually speaking a word aloud, (c) by pressing into their hands in a conspiratorial way a little folded square invitation, about 2.5" on a side.

I remember it as well as I do, I think, because I still have a copy of the invitation.  It also makes me remember the young guy at the copy place who helped us get them just right, using up approximately a buttload of toner, given that they were (sparse) white on black.  Here's what those invitees would find in their palms. 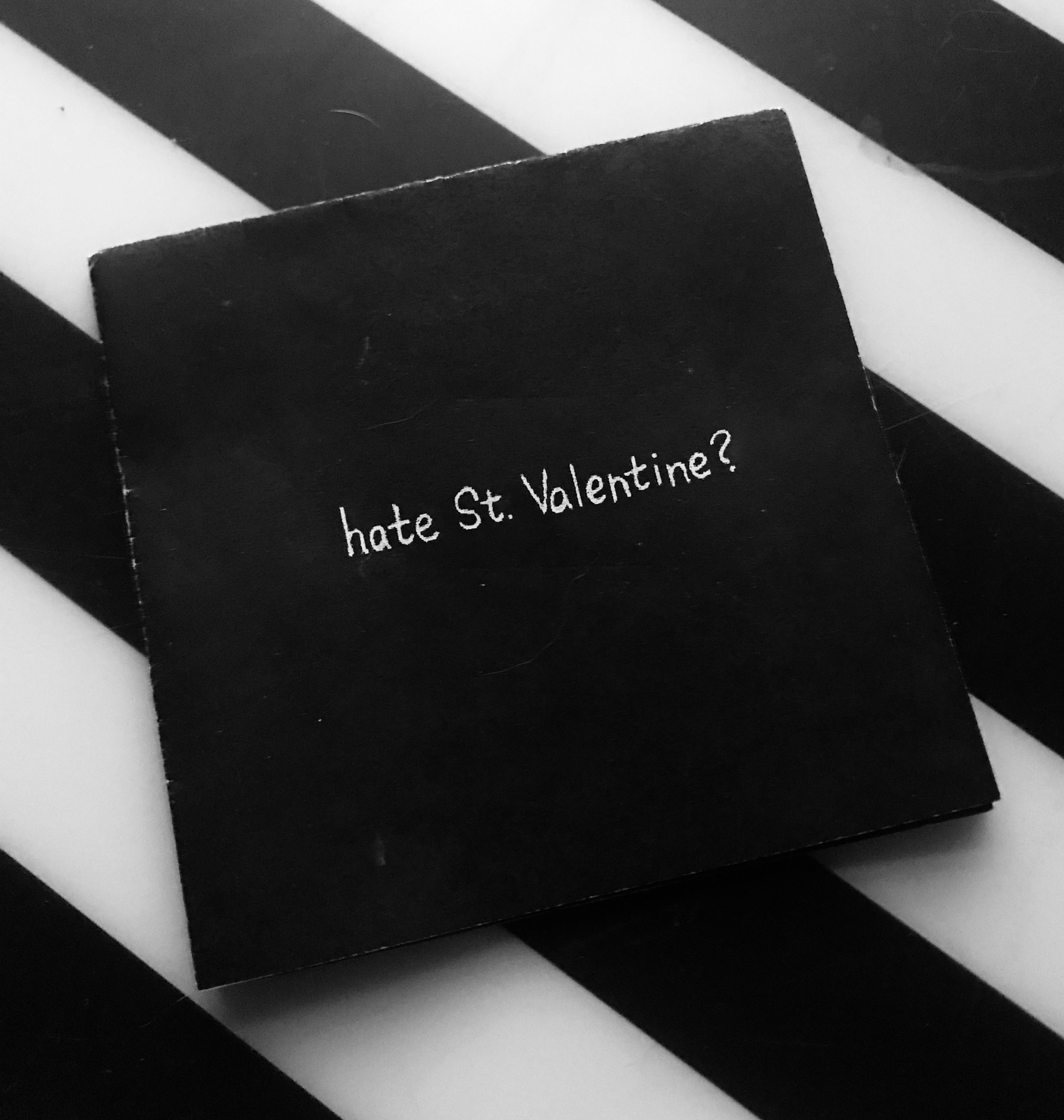 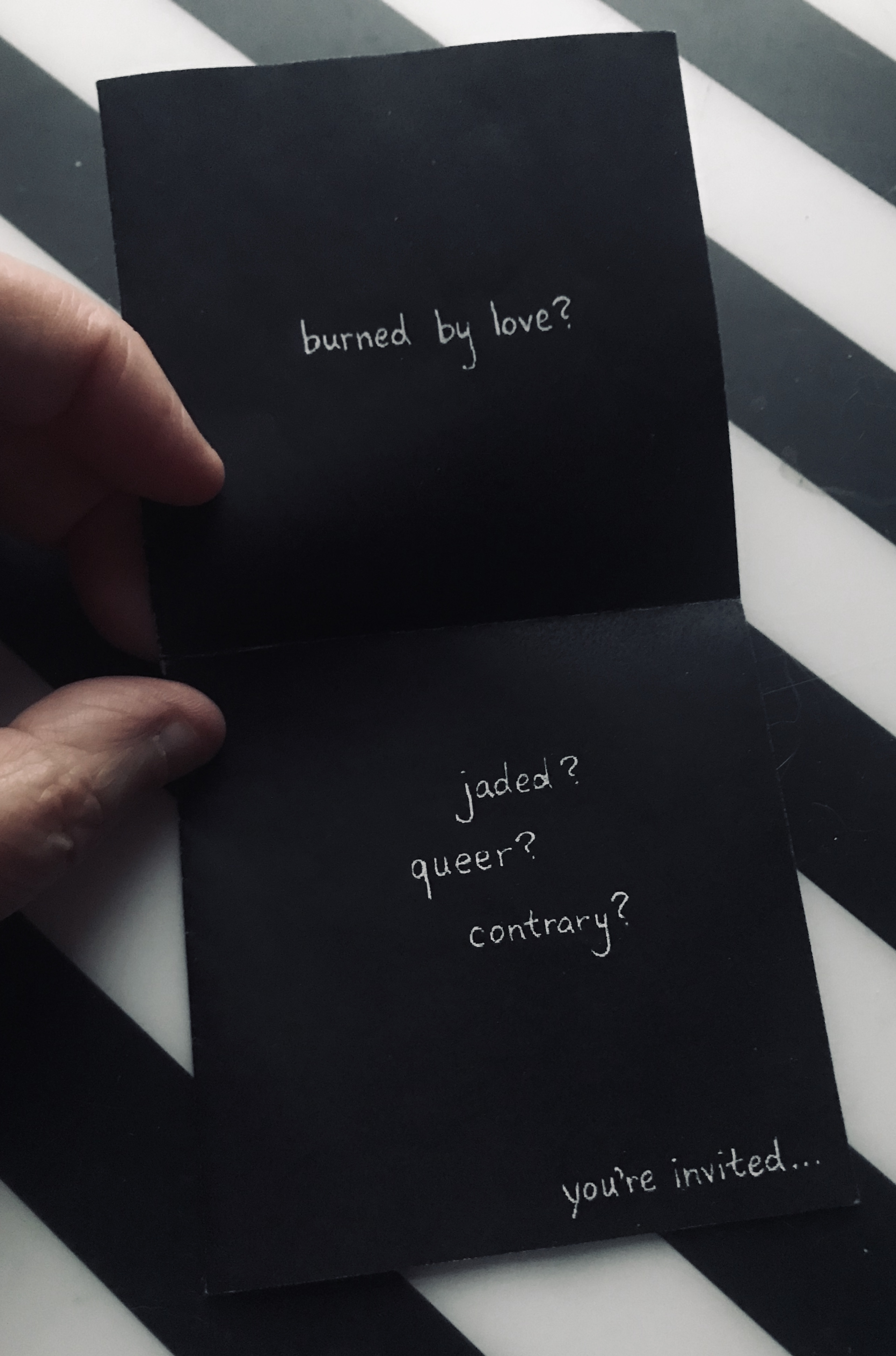 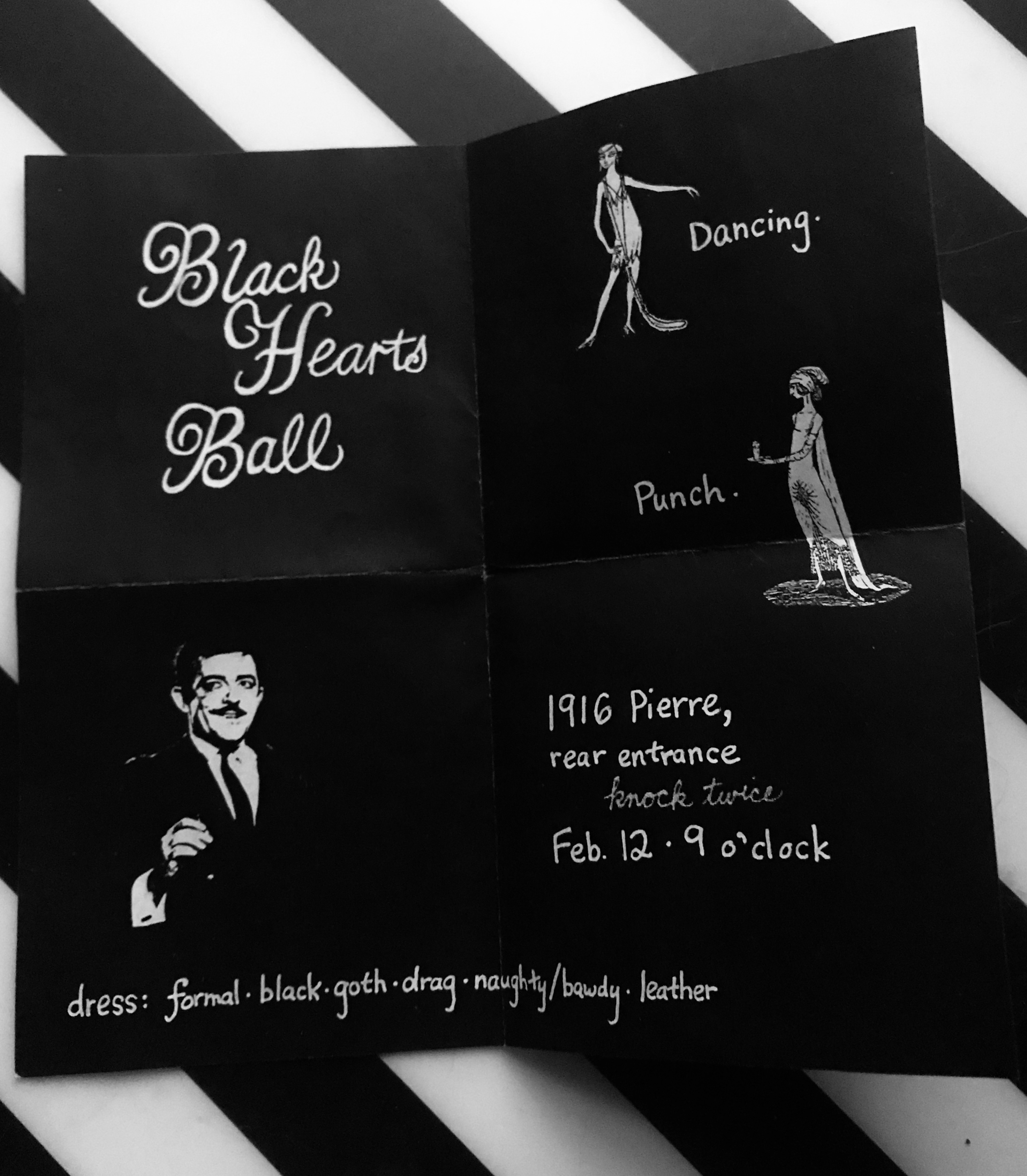 I don't know whether people really knocked twice, but we did have some impressive outfits complying with the dress code.  One fella showed up in a leather harness, ring centered between his nipples, and that was rather a surprise, for that guy.  It wasn't exactly the most wild or "out" crowd we'd met there, after all, and the polite Kansans could seem a little tame compared to the city folk back east we had known before.  So people choosing naughty/bawdy was especially nice.

One social worker left upset when she realized some people were smoking reefer, which was illegal.  Mostly, tho, it was a hit.  The absurd punch fountain with gallons of bright red punch, and dancing through the night.  A now-dead woman I loved, who had a few years on me and bad knees herself, was astonishingly hardy on that little dance floor, outlasting everyone.

Much of it I don't remember, and who knows how accurately I remember what I do, but I'm glad I kept the invitation, and I liked opening it up to take the pix for y'all, and I'm happy to have what memories I have of it.

I do miss the way that ex- and I threw parties.  She was great that way.  One of my favorite things of all in those years was lying in bed with her after such an event, talking about our separate experiences and observations of what others' seemed to be like.  For a long time after we split, I had a kind of hollow feeling after throwing a party by myself, when everyone had left and it was just me and my thoughts and recollections, and the clean-up.

It's been so long now since I threw a party I can hardly remember.  My vague sense is that I did get to a point, eventually, of enjoying the aftermaths again, if not in that particular delicious exhausted way I did when she and I threw parties together.

Will I ever throw a party again?  I hope so.  There's a lot of pandemic-type (plus regular) mess here I'd need to clean up, and there's that whole surviving the virus isolation that'd have to happen first.  And when we wake up and I look around, who knows who I might want to invite.  But, I mean, I'd like to, I think, have parties again.

Yeah, it was a bit ironic that I threw the burned-by-love? party with someone I was very much in love with.  And/or it was foreshadowing!  🤪     Yet the black heart I have now is no longer the anti-Valentine's type.  Right now I just have tired sad pandemic isolation black heart, some days more than others.  Some hours more than others.
Subscribe