I'm acting like we're already in the stretch of 90+-degree days, but we're not.  Today and tomorrow are 80-something-degree days.  The 90s start Thursday and go as far as the eye can see (on the weather app on my phone, anyway):  10 days in a row.  Granted, it's the low 90s.  Granted, it's supposed to get down to at least 67 on each of those overnights.

I'm sure I've mentioned here the handy comparison of emotions to the weather.  Usually that's not really about the weather but about accepting the vicissitudes of feelings without, like, arguing with them or fighting them, like the rainmaker in that play in which Elana had to kiss the guy she thought was icky.  Now I'm thinking of dealing with the weather, the daily small challenges of the weather-as-less-moderated-by-a/c, being like dealing with the coronavirus and its varying degrees of feeling threatening, endless, ruining, etc.  Radical acceptance, with masks.  Somethin' like that.

Here's today's tie.  I had the orange shirt on when I saw James's message, and the laptop was sitting on one of the robot boxes I have bow ties in, so I opened that box and found this tie to match.  It was the first thing I bought on eBay that came directly from China, right after whatever change made that possible, some years back. 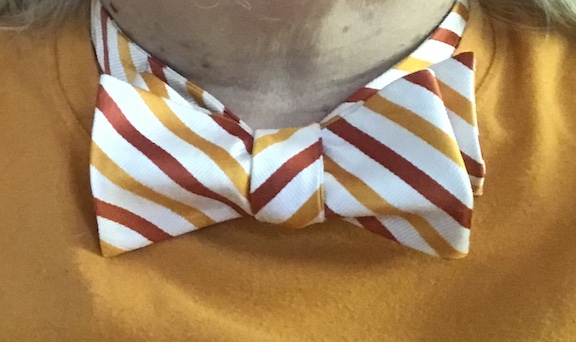 Gonna go for a late-night walk, and then maybe get up and go for an early-morning one, if I can pull it off.  My sedentariness has really settled in the past week or two, starting when I hurt my knee.  It's still a tad iffy, but I've been able to walk on it well enough for several days that this lazing about thing feels like recalcitrance.  In any case, I'm getting restless that way.  But it's so hot out.  And despite the virus action being relatively low in these parts in these particular days, I ain't into walking in some store just to walk somewhere less hot.

Despite what so many would say, I know, and I repeat to myself here (and must, often, and it's still not enough), I don't deserve to suffer.

There goes that guy I think is called Toby, with his dogs Cadbury and I don't think it's Pixel any more.  Pocky?  Something else?

A video of a husky and a coupla others at least one of which was a golden smell-investigating a tiny kitten had me wanting a golden retriever.

For now, tho, it's just us and the heat and the galleys I suddenly don't want to do cuz the new Box is still novel and feels productive.

They want me to do another trivia game for the office.  Gotta come up with questions.  I have only 2 on my draft list so far.  Did test Jackbox games for a get-together with those coming up in my personal life.  And cuz I'd get 5 bucks off if I spent another 9 at Steam, I also have Monster Prom and a thin-black-line-drawing-on-white Hidden Objects game.  Oh, plus the one I haven't started yet, rumored to have lesbians in it, I forget the name.  First episode of something.  Games having episodes now too.

Some maroon is shooting of fireworks already tonight.  It's nowhere near dark.  I think it's on Kensington.  Not just firecrackers, either.  Had the sound of the poof of color at the top.

Gotta do a little more work now.  Even with that, I might not get to 8 hours today.