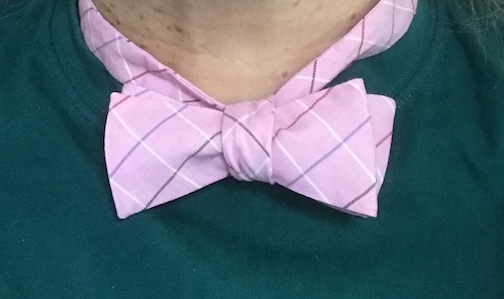 It's almost Wednesday, and here I am trying to get this post in.  Untied that tie hours and hours ago.  Didn't tie it until after tai chi.  One of the fellas put himself in front of our building in his bow tie, so I tried to put myself inside it, but my camera's specs aren't much, it seems, and the best I got was
this shot: 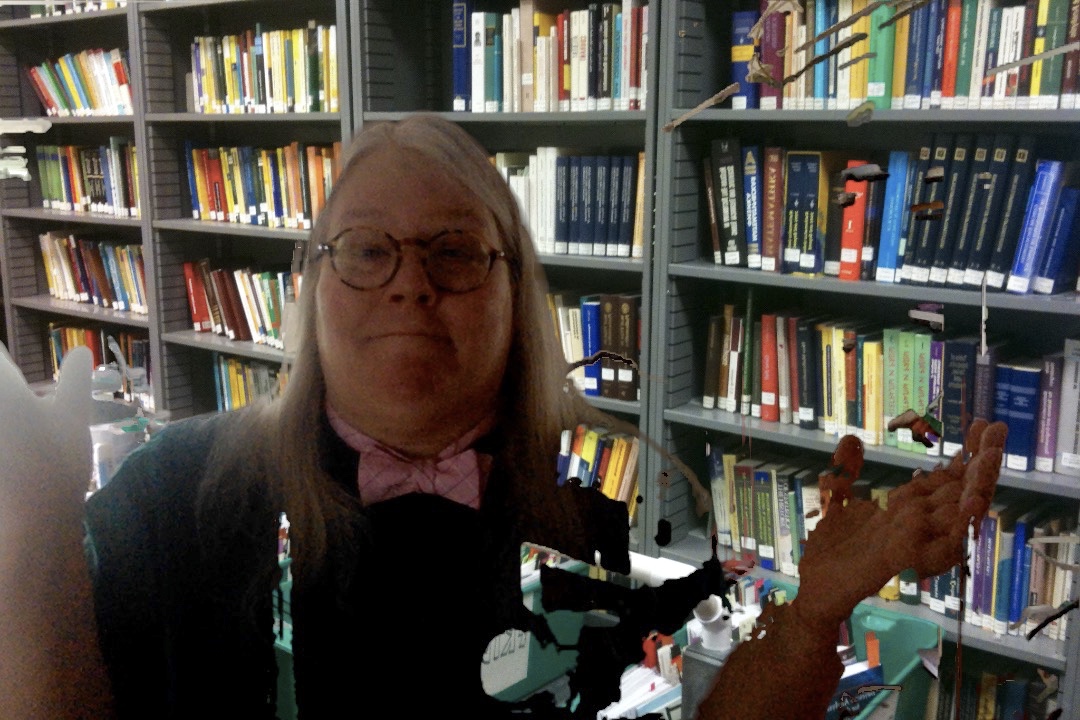 We got word that our jobs are probably good for the rest of this calendar year, but they're asking for volunteers to cut back hours or take unpaid time off, to make it less painful next year.  I guess this means there won't be any contributions to our personal computing needs.  I could probably try deducting some computer costs from my taxes, but I still have to pay for them.  Today's temporary okay/good news notwithstanding, insecurity has me afraid to incur major expenses, like the new oven I've been saving for, or help with the yard, or a dog.

The city announced that the outdoor pool season is cancelled.

We had our last chorus Zoom rehearsal for Monday night.  It was nice.  As of tonight, over 40 of us got videos in for the group chorus thing.  It's hard to imagine that anyone had much fun doing it, and most seemed to have had some difficulty, frustration, self-consciousness, etc.  I do hope it comes out as well as I'm imaginging it doing.

Now my current project is prepping a Zoom trivia social hour for my coworkers, Sporcle style.  The big challenge is hitting that sweet spot between too easy and too hard, formulating questions.  Wonder how many will come.  And which departments will represent.
The women's dating app was a washout.  Did I say that already?  My calendar just reminded me that I had to cancel this week to not be charged for membership.  It cracks me up what profiles the catfish and/or the site constructs, and has send likes to me.  They're made up to seem like a cross between porn stars and, I dunno, models like what Steve & Barry called "car show babes", or like some softcore girl-next-door, or occasionally like a sort of straight Hollywood young unthreatening dyke.  Dating apps are like Driver's Ed or gym.  They emphasize how freakish I am.

My hunch for a bit was that my next love would be a guy.  But what do hunches mean now.  Or at all, really.  I had a hunch about entering into some stage of seeing how long I could live off the food in the house, like, last fall, and through the winter.  Maybe it prepped me a little, as did, maybe, my precocious social isolation and getting accustomed with the dog to not really going anywhere and practicing worrying, off and on, most of my life.