I barely got showered in time for Zoom tai chi.  Hadn't worked out my overnight back pain yet, either.  It's been cold up here for days.  Today rose into the 50s F, and there was sun.  I walked a little and talked to Peter for some of it.  Last time he called I was in the middle of a Zoom birthday party I've turned down the RSVP to for years, cuz it's in NewJersey, but this year I could "be" there.  We played Jackbox games.  That was my first time doing that.  I liked that.  They were bright people.  The worst kind of games at parties are the ones with people who are just not cut out for the game at hand.  Like when a cluegiver has 30 seconds to get you to say a certain word and they can say anything except that word and all they say is the likes of "Oh!   Geez.  This is... this is a hard one.   Um....  Wow, I can't think of --- well I couldn't say --- um --- [shakes head]  gosh I don't know....  Oh I'm sorry guys.  I knew I was going to suck at this game.  Darn.   uh...."

Didn't put the bow tie on until after tai chi.  Here it is. 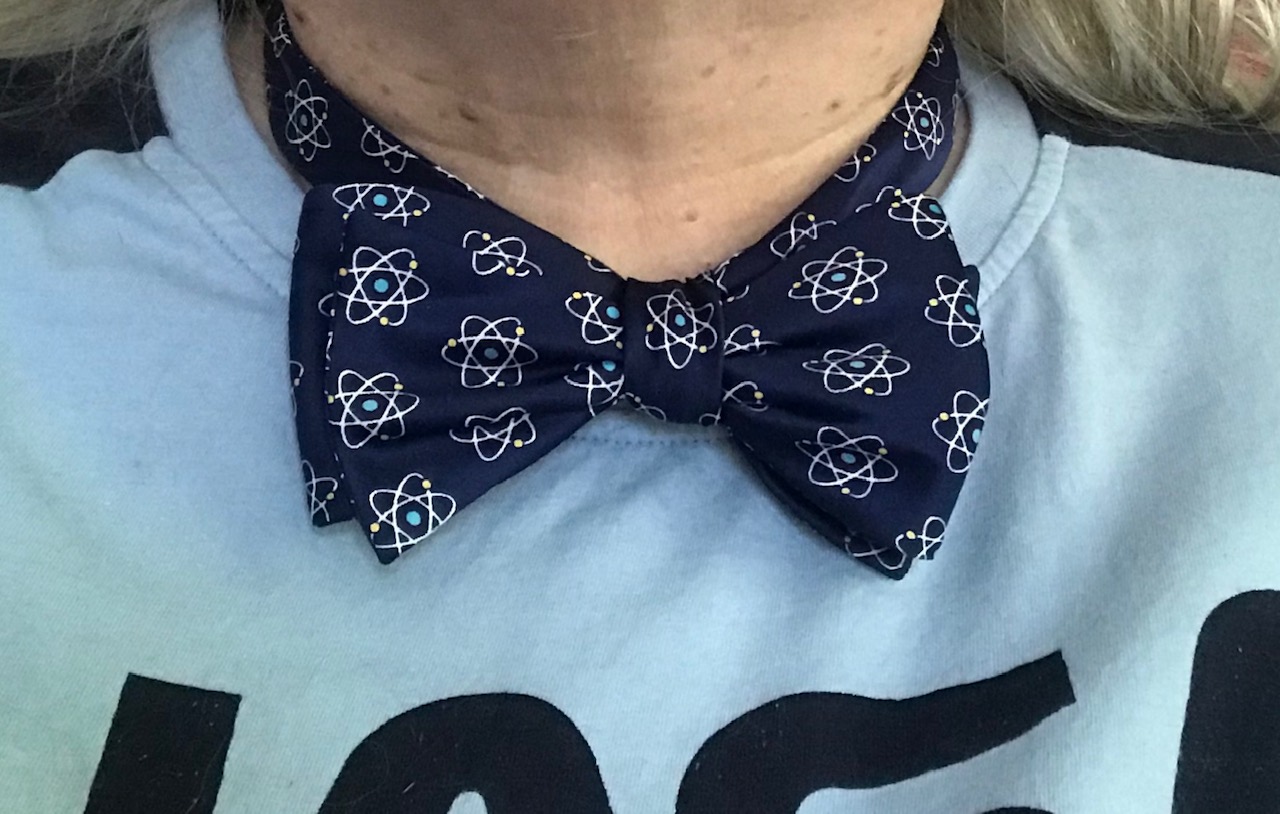 When it came time to show it to the bow tie gang in the email thread, I'd taken two pix, having forgotten to look at the lens in the first one, but liking the other one more.  So I used some free online gifmaker and made
this:

The runners of the automated vehicle I had lunch delivered at work via, one day in the beforetimes, during its pilot program (during which the little robot was followed around by a bicyclist), wrote to say it's doing deliveries in my neighborhood from the pricey produce place just the other side of the railroad tracks.  I set up a delivery from them for tomorrow. It should boost my supply of fresh things for a bit, plus I'm hoping they'll have their tortelloni in the creamy sauce.  But I will want to hit a regular grocery before long, not the least of which because I spilled a good third of my remaining ground coffee all over the kitchen a couple of days ago.

Things feel iffier at work lately, as the prospect of cost cutting is mentioned a bunch from on high.  I know I'm lucky to have a job I can do from home now, and don't have to dress up for even when I go there, and apply my special skills to in ways that the average person couldn't, and where people are mostly weirdos themselves, not to mention pretty accepting of other weirdos.  Yet I just got my ass out of debt, and there surely ain't much margin, and I surely don't want to head right back into that. Plus, longer term, ... well.  Let's not go there.  Suffice to say I keep having to fight the going there.

HBO is free this week, so I'm catching up on Issa Rae (Insecure), and I've now watched an episode of Gentleman Jack.  Based on a true story, hunh?  I found out about that show when a chorus colleague I met first at the cat café sang the theme song at the cabaret last fall.  The character is looking interesting.  Sympathetic, for someone who's suffered similar pain in Love in the Time of Homophobia, but perhaps a bit of a scoundrel?  Can a kind smart person be called a scoundrel for manipulating and otherwise machinating her way to --- well, I dunno. I've seen the opener.  I'll keep going until the free is over.

I feel like there was something else I wanted to watch the next time HBO was free.  I've stopped on West World, and never got into Game of Thrones, and Six Feet Under is available elsewhere. There's just a lot of good stuff on HBO.  Maybe I'll take a chance and buy it for a while.  Would that be tempting fate, work-prospects-wise? No, because there is no cause and effect there.  But maybe I'll pinch those pennies a while anyway.


Cooked a whole bag of potatoes a couple of days ago.  Their eyes were about to grow eyes.  They had eyes in the backs AND the fronts of their potatoselves.  They were up to up and sprout plants and walk out to put themselves in the ground.  And they couldn't do that, cuz we still have a freeze warning: tonight.  May 12th.

Oh for a stretch of mildly warm days before the mosquitoes get up and going.

Oh for a vaccine.

O! for a vaccine.