So.  Long day.  Coupla Zoom meetings, one of 'em therapy.  That was good.  I'd let her know about the dead cat right after it happened.  Is it weird I think of her along with a handful of folks from real life?  I do.

I mean, it's not like she's not real life at all.

We have a new Bow Tie Tuesday participant at remote work, and another coupla people who are being better about wearing a bow tie now that we're stuck at home than they were when we weren't.  I wore this one today, which makes it owls 2 weeks in a row, not cuzza any desire to call up my inner wisdom or wondering "Who?" but cuz I had it out for the chorus Zoom scavenger hunt last night (something I made).  That was good, the little breakout with Lorrel and Ross.  We were randomly put together, but it has a Kismet kinda feel to it.  Ross, in a way, represents hope.  He's a really good guy.  And Lorrel and I have been weirdly out of touch, almost like when she's in France for a summer class and pretty much never communicates.  Anyway, here's that tie: 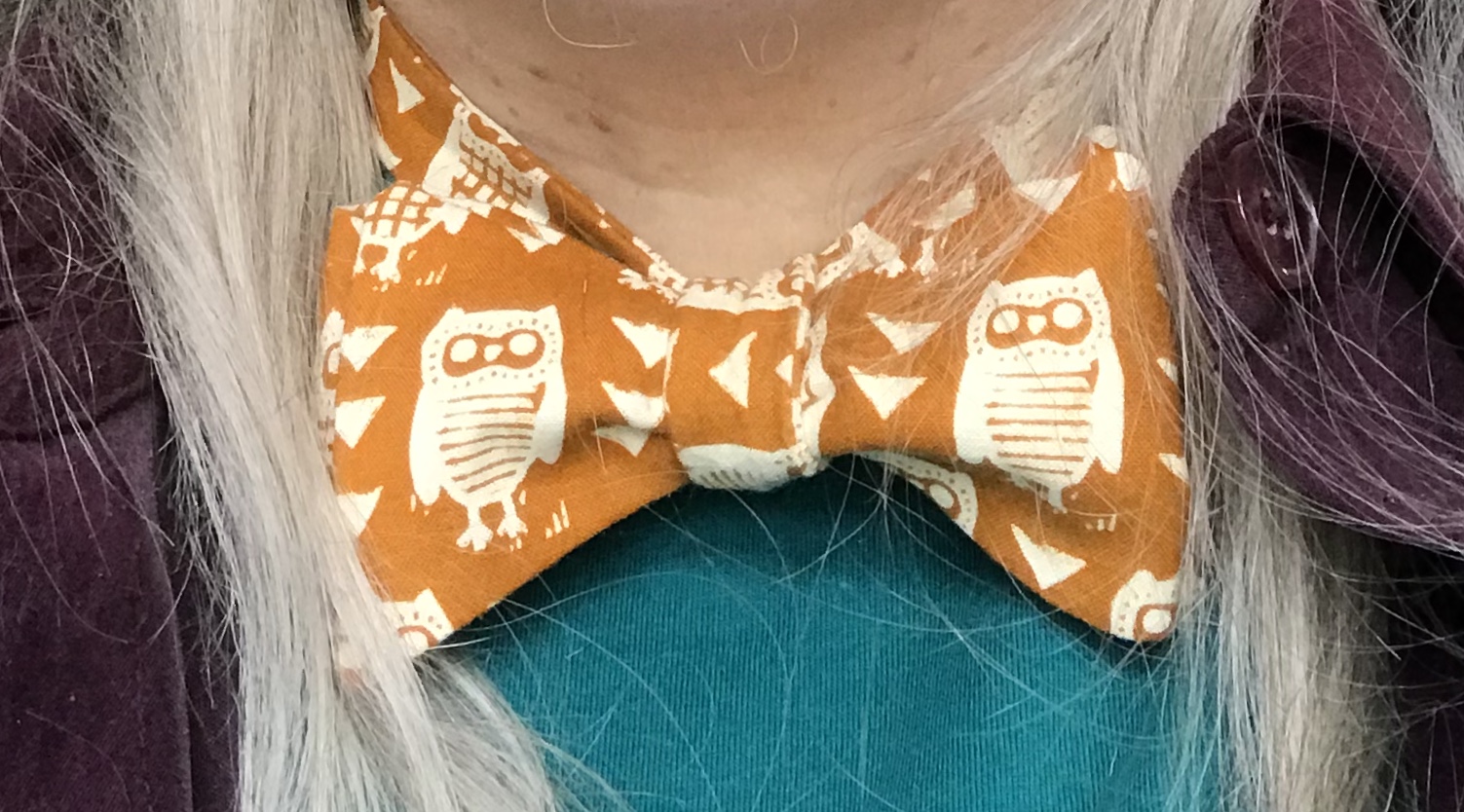 I don't think that wine color exactly matches, but I was cold and threw on the closest set of sleeves.  It's this smooth polyester- or rayon- or other fake-type fabric lining a faux suede.  I got it for some business-y thing I had to go to in Missouri with my boss Leah, and I wore it to a holiday party at MR early on, but only recently realized it's actually kinda comfy.  Just now it's covered in cat hair, cuz laundry is not exactly pressing, and pressing isn't even on the radar.  Not that you'd press that jacket-shirt/camisa-chaqueta (Did I tell you I'm "learning" Spanish in the Duolingo app during this time?  I am.) --- I was just running with the "pressing" joke.

Since we're showing each other our ties in regular person-pix, the cluster of BTT folks at work, I took one again that includes me.  The new guy put himself and his blue folder on a background of a cruising yacht, so I looked around for the closest get-away background, and my kitschy (yet sincere) German paint-by-numbers of a landmark at a certain time seemed the way to go. 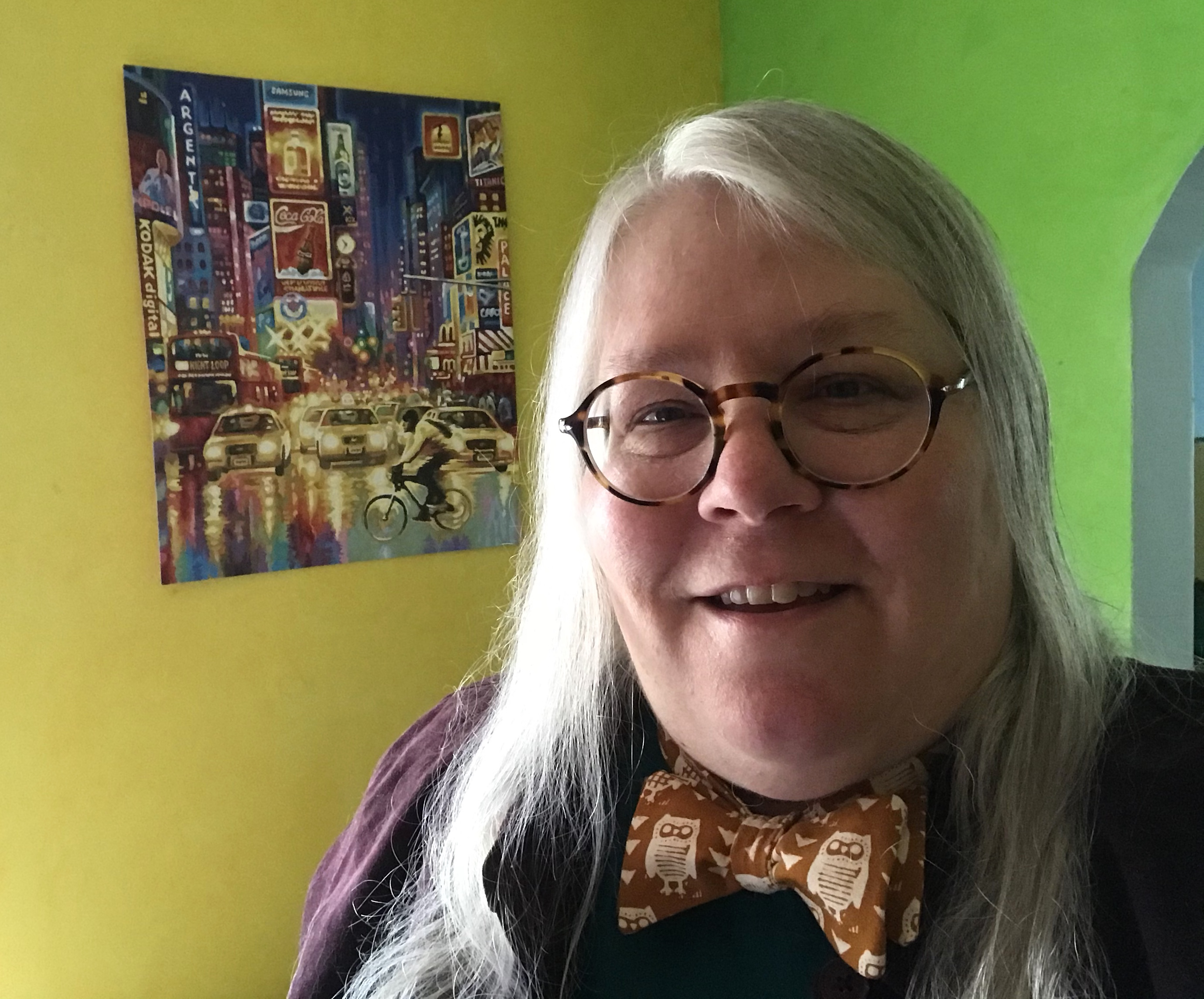 Perhaps you can see the weariness in me.  Somewhere in that doughy face.  You'd never know I've had some up swings in self-care in recent months.  But parts of last year were really hard, and this current thing is taking a toll on me.  One thought I had not long after Manfred Mann and the Earth Band died was how it's more okay for me to die now.  He seemed to me like he'da had a harder time adjusting to new people than ol' crazy Horkheimer pup would/will.  Of course another thought I had was that maybe I'll have a Zoom funeral for him.  It'd be part novelty and part remembrance and part small social occasion.  If you're reading here and would be interested in "attending" such a thing, let me know.  It'd probably be next week.

I'm supposed to call my sponsor tomorrow night, and I've not done much homework at all.  She's going to tell me she's proud of me anyway.  It's funny, it seems so rote, gee there's a word people don't so much use any more, --- rote, and specious, were I to think about it, yet it's good nonetheless, when/if I just go with it.

Young Dizzdude has been goin' kinda nuts, wanting entertainment and exercise.  One new thing since his brother disappeared:  he climbs up me to grab my head between two paws and chomp on my hair.  I swear he's trying to wrestle-harrass me like he did Manny.  I started teaching him the climb-down-my-back way of having an instant "down" from being held on my shoulder.  Manny and Mochi never went for that, but my earlier cats did.  Another thing:  he's been spending more time in the kitten room, or "his" room, cuz he was the last inhabitant of the nursery.  Strikes me as a comfort thing.  Sometimes he'd sleep part of the night in there, or even have an evening nap, but he's going in there more lately.  Of course I'm projecting all over the place, but that's a room Fess ordinarily wouldn't join him in.  (Fess = Festo = Manifesto = Manny the Manly Man)

Had just about the first shower at-home today in over a decade in which I wasn't greeted as I got out by that kitty-cat.  He'd come over and let me drip on him so I'd then have to towel him off.  I started making it a habit to pick him up in the towel, and carry him to the counter by the food dishes and the windows in two directions, where he'd get a rub-down from the towel in favorite places (ears, chin) and then a good scritchin' all over from me, along with maybe his ears being cleaned or his claws clipped, cuz it was a happy time, and that's when to sneak that stuff in.  I often thought how he'd be so used to being wrapped up in a towel that he'd be prepared, and not averse, and maybe even predisposed to comfort, at any time in the future at the vet when they'd bundle him that way to carry him to something unpleasant or scary-different.  I hadn't thought how one day maybe he'd be in a towel, inside a blanket, on a cold night just before dawn, in my lap in the passenger seat oj the Jeep with the vets shivering in their jackets while we all spoke in mellifluous, calm tones, petted him, and shared our love. 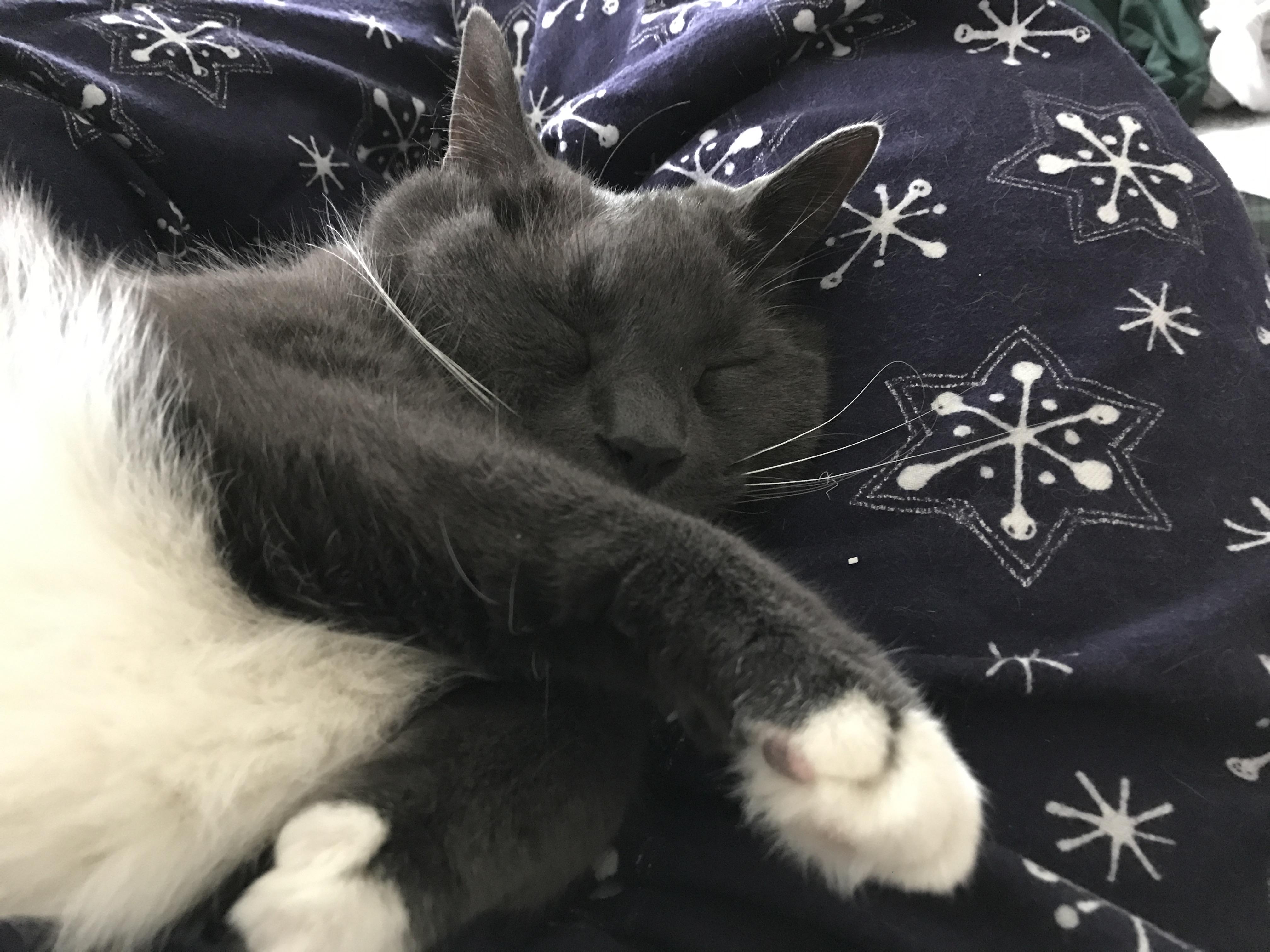 [asleep in my lap, a while back, not dead]
Tags: btt
Subscribe