It's been a long day.  As it ended, I had to do some re-centering, and digesting a whole buncha onion rings outta the freezer, and fighting off the irrational notion that I jinx myself by feeling my oats.  I don't believe that, really, with all of me, no matter how true it feels.  That kind of feeling is mistaken.

Haven't jumped on for any campaign duty yet, and I will in a minute, but I remembered I wanted to post this BTT post I left in the drafts.

Today's tie is one of the several I got super-cheap at ties.com at the end of the year.  Like, 2 bucks each. 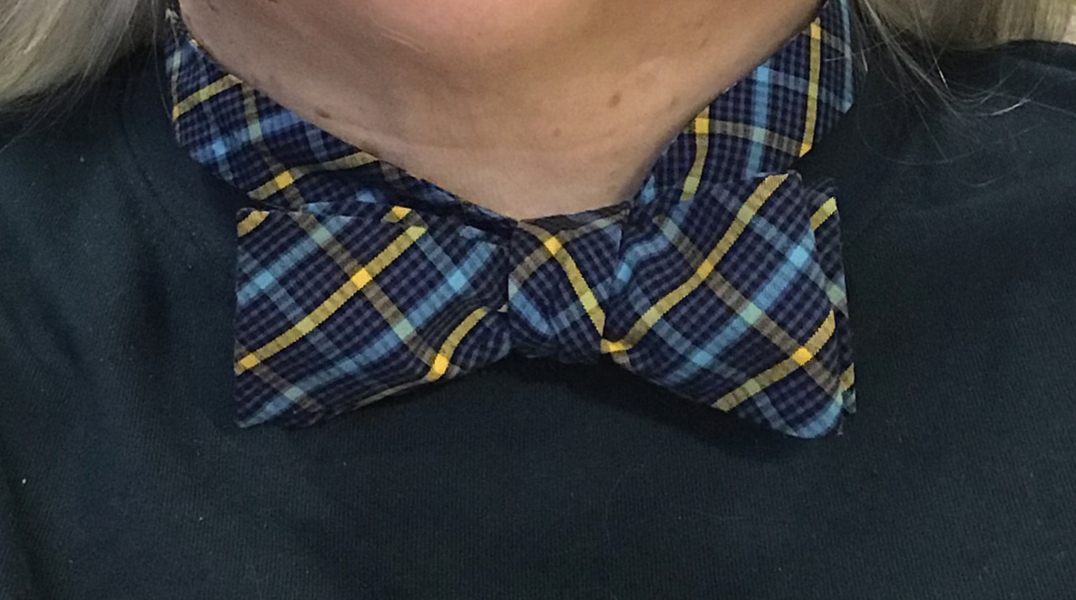 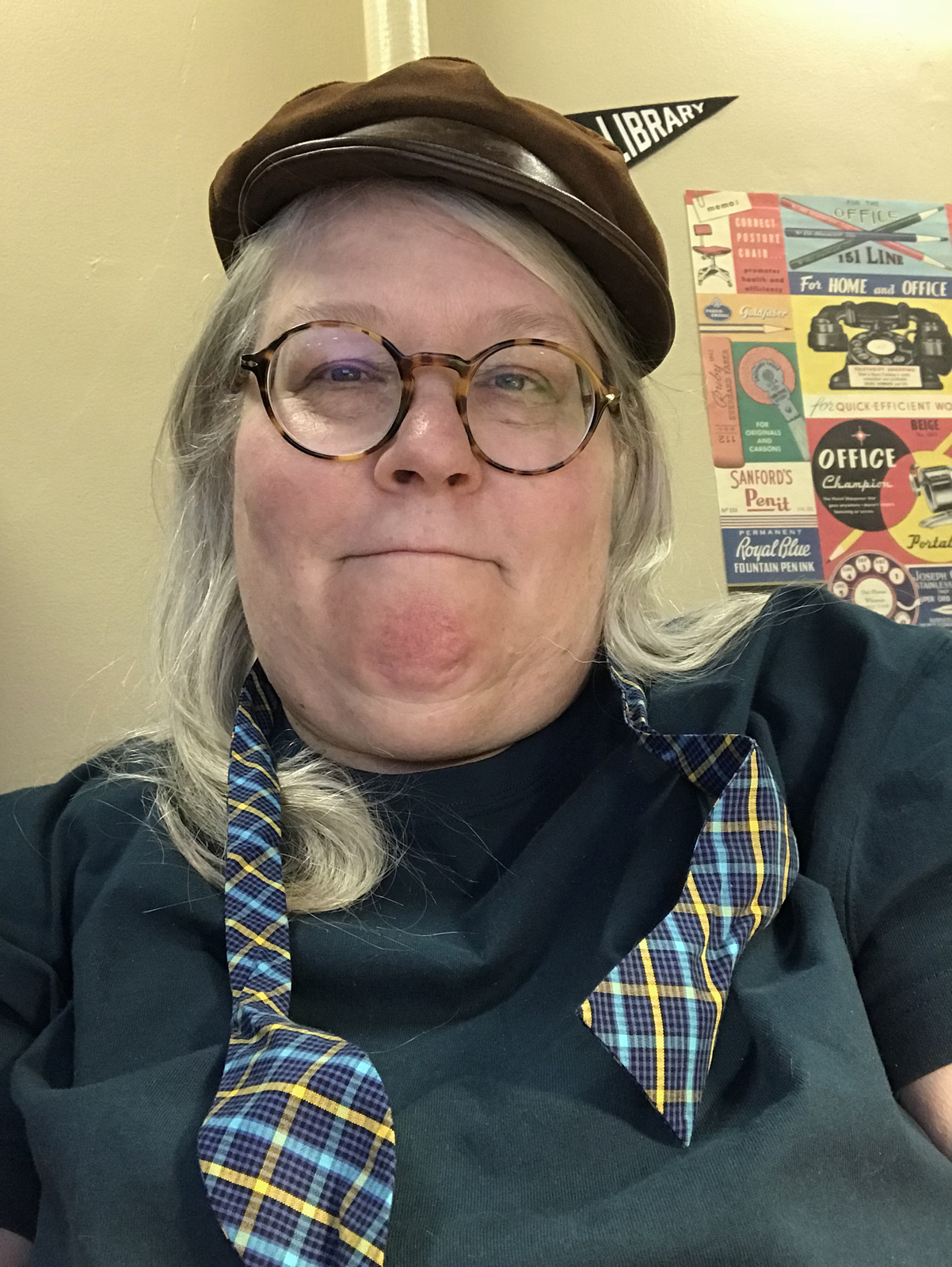 I like all the various things I see in my face there.

This afternoon on the way back to work I went for a self-treat decaf latte, and I decided to stop in the Warby Parker store nearby, just to see what they had.  The gender-bendy Madeleine gave me a quick lay of the land, and I tried on a few pair.  In a wildly uncharacteristic move, I just went ahead and bought a pair of frames I like. Within, like, less than 10 minutes.  :)  This shall be my cue to go to the eye doc's.

In the back of the store they have pencils with things written on them for sale as a fundraiser for a local literacy/writing-tutory group.  Reading them, while Madeleine retrieved my frames (and put them in a nice cloth bag), I laughed out loud heartily and hardily, and several times.  I bought a pair of MAKESHIFT DRUMSTICKs (cuz you gotta have 2), and didn't realize until back here that (on top of "makeshift" being a word I love) those are both compound words.  So it's like 2 double-chocolate donuts, or 4 chocolates, look do you want these or what.

My favorite pencil, though, was the sexy flirt line one:  WHAT VARIED SYNTAX YOU HAVE.  Omg, amirite?  Totes.  I bought the last 2 they had of that one.

One of the many realizations/comprehensions/noticings I experienced while (finally stopping dragging my feet and facing up to) prepping my open talk was seeing a pattern with the people I've really fallen hard for/with--- not their distaste for self-examination, nor the willingness to be abusive that kc pointed out.  It's that the building of intimacy with each of them involved written communication.  Letters; email; chat.  The personalized exchange of words put together just for each other, and sent, through the mail, through the computer, across the room.  I don't know how much it did for any of them, but it can be a big thing for me, in getting close.  The taking-turns of it is part of it, and how that goes down.  But zinginess with words, in short.

Funny, the day after the talk I felt all confident, and then I got set back on my heels by a weird thing in just such a context.  But I think I understand what happened.

I swear, having an impression of at least sorta getting what's going on can make challenging happenings a lot less challenging.

The confidence, like a sort of centering, has returned.  Hope it sticks around a while.  I like it.

I thought the theme of the talk would be self-care, but it turned out to be structured on relationships.  I got some good laughs.  I hit some painful stuff.  Even some stuff I hadn't processed, to speak of.  (Or spoken of.)

It was in Pontiac, not Plymouth, which I kept saying.  Pontiac's sorta north-middle of Detroit.  The phone took me along Pontiac Trail, and switched into a night mode I'd not seen before, during which you can see the bodies of water surrounding yer route, and that route had bodies of water, sometimes right next to the road.  Deep slightly green shadowy blue mysteriousness.  On the way there I was trying a run-through of the talk, seeing how it'd go in 45 minutes with what (I remembered as I went that) I was planning to talk through.  On the way back, in a sort of afterglow, it was even nicer.  Just going somewhere, being somewhere, I'm usually not.

I'd forgotten how people come up to talk to the speaker afterwards.  I've done that, at open talks, at least when there aren't 300 people there, and always when I know the speaker.  But a big "o right" hit me as the folks were all offering hugs and nice words.  And then the sponsoring group gave me chocolate.

Earlier we'd all eaten a lot of chili.  It was a chili cook-off/contest.  There were 6 chilis.  I dutifully sampled all, and voted, and then had another few spoonfuls of each before it was time to be introduced.  So I was getting fuller and fuller, and a little sleepy.  Then I got nervous.  I woulda taken a Xanax outta my keychain pod, but it didn't seem in keeping with the spirit of the event, what with most of the folks there being alcoholics.  Sure nuff, tho:  as soon as opened my mouth and started talking, I was fine.  I coulda gone on for two hours, if need be, albeit perhaps without holding the audience real well.

The story that got the most visceral reaction (of amusement, chagrin, and "eww") was a story of me as the (foolishly) heroic ex-, coming to the rescue of my no-longer-gf.  She'd fucked some guy, using a form of birth control you may or may not remember--- the sponge.  There's a Seinfeld episode about it; perhaps you recall.  Anyway, goshdarn it if she couldn't get the thing out afterwards.  So she called me, and next thing I knew, there I was, heading in, reaching through that conglomeration of their body fluids to retrieve the gross-looking used sponge, which I recall having turned a sort of gray-green.  (It didn't take years to understand that that was a low.)

Among other happy thoughts I ended on was a report of my greater sympathy for myself, in my disease(s), having brought me to more true empathy for addicts of other sorts.  It's true.  And it's also true that sometimes I still feel slapped in the face by some game-playing b.s., like the other day.  And I have to remember it's not safe to try to process with everyone, even some dear ones.

All in all, it did turn out to be a rare opportunity/prompt to look back and see some of what it was like, what happened, and what it's like now.  It makes for a compelling narrative, that formula.  Maybe not entirely unlike how Bernie's campaign is asking us to relate to each other, via personal stories.

Probably gotta get on some campaign stuff now to keep up with my goal for the week.

I also want to write back to Emiene, with whom I had a nice unexpected flurry of texting today.  I was telling her how I admire her way of knowing where/when to draw the line with somebody (like she just reported doing in a situation when she was catching whiffs of emotional manipulation).  She seems so matter-of-fact about it, the walking away, in a way I so am not.  She wrote back that I've always seemed clear on what I want (gotta think about that).  Then she added: "Your trouble was that big ol heart."

I heard that.  And, tho it's maybe not a great thing for me, it felt nice.  If a little hopeless-case.  I mean, you could be remembered for worse things.  I've also liked being called, by one who knows me well, "sweet-natured".  And I do hope that's true, at least sometimes.  Can I be a strong, kick-ass centered powerful confident force to reckon, while stalwartly taking care of myself, who is also sweet-natured and grappling with a big ol' heart?  A.: I dunno, but it sounds like something to aim for.  Focus on the stalwart kick-ass, though.  For now.  For a while, at least.