Dang if I didn't forget it's Tuesday.  All last night it felt like the holiday had started, perhaps because I ran out on chorus to go hold some guitars again, knowing that the last day on the big sale on the guitar I was most leaning to is today.  But I hadn't held/tried some of the full hollow-body ones, and even though I figured they were a long shot, I just wanted another session of checking the ergonomics of the one I liked most, and a chance to give another go at the Wildkat(, which is an alternate spelling I actually like, unlike "Kustom", I'm not sure why, but partly for the -kat jiving with the wild, vs. say my mother's distate for the Kwick Mart or Stop or -y Stop or something in Lawrence, a.k.a. Larryville).  Also I needed to wrestle a little more with the anxiety impulse and fear and self-doubt dogging me (and perhaps providing addictive hits?) when I actually get close to taking the dangerous-feeling and defiant(-of-ghosts) leap of buying an electric guitar just for the fun of it even when a and b and c and d and e and f and g and h and cetera.  A main theme, in the form of a question I got at on the drive: how compelled am I to be afraid of the spectre of my own future self-recrimination?  Answer: apparently pretty darned compelled.

But there was this guy Will there this time who for some bizarre reason took me seriously as a potential customer or human being or maybe both but at least I really do think the latter, and he demonstrated credibility in various ways (gut and brain) and had zounds of info I wanted and mostly didn't even know I wanted.  Then he showed me some of what the guitar and a tube amp can do when the player has some chops, and that was super-sweet.  It never crossed over into feeling like him showing off or wanting to be appreciated for his skills or making it an opportunity to goof around at work.  He reminded me of many of the best things in teachers/trainers/tutors/coaches.  I still didn't go for it, purchase-wise-speaking, on the spot, but he did the best thing: I left there feeling good, and in touch with the potential joys that I want to be in touch with, instead of mired in the horrid mental goo of resurgent CPTSD and the ever-daunting struggles of simple consistent functional and nurturing self-care.

I love having good experiences like that with guys.  The kind where certain kinds of pretty much ubiquitous bullshit disappear and you're just lost in whatever you're talking about or playing at or being jazzed by or engaged in.  I like it with anyone, but it's rarer with guys for me now.  Has been, a long while.  Probably gets me on a sentimental level too, on accounta having had or at least felt like I had that with guys, back in the day, a lot.

In general I suspect it wears on me that so high a percentage of my interpersonal interaction time these days is with folks at the office.  It's not the folks there; it's the officeness.  Care is called for at the office.  So it's not carefree, if I'm doing it right.

Still, I let myself wear a Santa hat today, joining a fellow copy ed, despite the risk of seeming to promote a Christian holiday.  And then, in the Admin kitchen, suddenly Mike (newly a boss) was tapping his foot and staring at me in (what I figured correctly was) play anger, and at the water cooler I was all "Wha'? Is it cuz I'm promoting a Christian holiday, or I'm not deserving of the hat, or you want water, or what?"  Turned out I had forgotten it was Tuesday and didn't have on a bow tie.

He didn't either, but he often doesn't, despite being the guy who taught me how to tie one, and so I'm the one usually kvetch about noncompliance.  Today he asked whether I knew he could make one out of a dollar bill.  I did know.  Then he made us one out of a buck-sized piece of paper and I did too, and we futzed a while to figure out how to affix them to our attire, and then we took a pic to send Dan, our Founder, on accounta he isn't here today, and we love Dan.  I mean, I love Dan, though I do barely know him, and it just seems like Mike must love Dan too, cuz what's not to love?  Plus he's Our Founder.

So, if you wanna see today's bow tie, and more of me than you usually see with it,  behold: 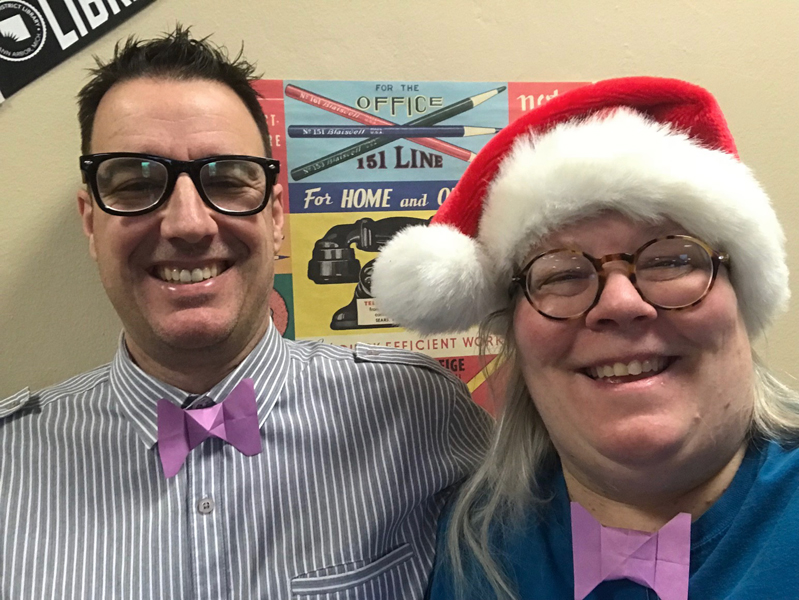 (His looks better cuz he's done it a bunch. Plus mine was compromised more in the affixing.)

P.S.  I just talked to Will and (after some sweetie-narrative-related subterfuge that I'm not proud of but that worked) (NOT flirting) he matched the subsidiary's sale price and got me the discount on the amp and so I'm taking that much of the plunge, albeit with an option of returning the stuff within 45 days for a full discount if I have Big Regrets.  I aim not to, though, by aiming to have some FUN with them in the meantime---once the guitar's in the store and I go pick up the stuff.  Hey, I'm only so long on the planet, after all.  Less more than ever before!  (As is true for all of us.)

Early days with an instrument are like getting a puppy, only the tedious part takes longer, and it doesn't turn into a glorious creature who loves you, but there's still some aptness to the analogy that you gotta put a good bit in before the simpler enjoyment starts kickin' in.  O to get to where it's just an extension of yer body!

P.P.P.S.  Someone who hasn't been speaking to me just spoke to me.  And then spoke again, and then we exchanged several sentences.  I've been doing well at the work of being okay with her not speaking but THIS FEELS SO MUCH BETTER.  I guess I'm always gonna be this way, yes?