It's hard to concentrate at work.

Several folks have taken off already--- we get 2 free hours today.  I came in late, just after a crazy 10-minute windstorm came through my neighborhood and took out power.  I'll be texted with news of any changes in status.  Seems like maybe I should just keep working, reducing the hours of leave I'll need to use this week.

My Stadia stuff arrived but I didn't take it out last night.  I did open up Josh's outfit from We'll Never Have Problems Again.  It's a bit of a thrill, gotta say.  Funny thing— the shoes fit me, pretty much.  So I put 'em on and stood up and tried to walk.  The heels are easily the highest I've ever been in, and they're platforms too.  I swear I don't know how the guy walked in them, let alone danced and popped back up from the splits and such.  They do have some friction-providing pads affixed to the non-heel part of the soles, but still.  Here's a shot of them on my feet before I collapsed into a chair and gave up: 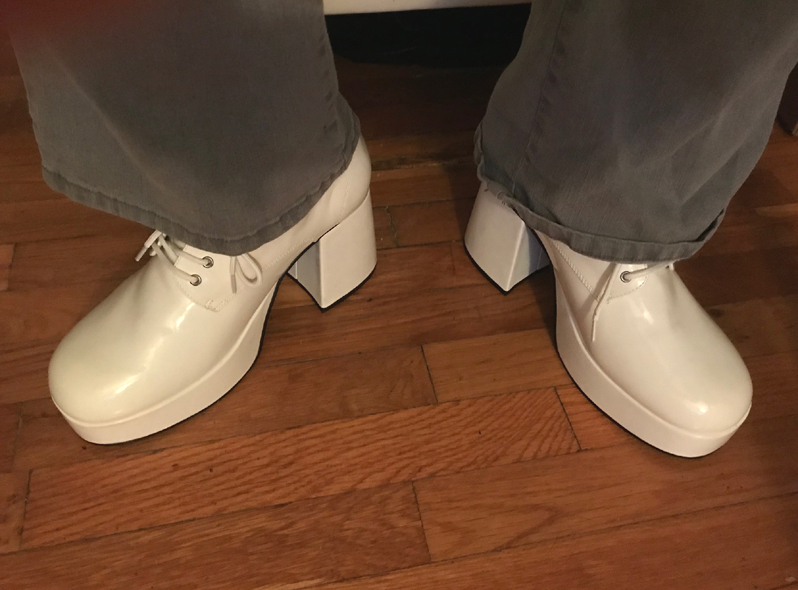 Manny's bloodwork came back.  It's good overall but he does have big elevation in that heart enzyme.  Plus in the earlier-indicator kidney problem one.  First order of biz is apparently getting him to a kitty cardiologist soon.  Maybe he can be cleared to be knocked out and have his teeth pulled.  He seems in fine spirits.  Mr. Lovey-Dovey.

I have two items waiting for pickup at Target today:  a drill and some baking powder.  My baking powder hasn't expired, by date, but it's been open since at least this time last year, and I didn't think to test it before leaving home today.  So Clabber Girl it is.  The drill's to drive screws into loose steps on my stoop.  I figure the less-than-freezing days are numbered that way, and Friday looks like a good possibility.

Got a lot on my mental to-do list for the long weekend (which I didn't used to take but now we have to).  There are fun things on there, and chore things that'll result in satisfaction if I get to them.  Plus I agreed to do some more Bernie stuff.

I can still assemble my sweet potato biscuit stuff tonight and tomorrow morning, even if the power's still off, on account of having a gas stovetop, with just a coupla openings of the fridge to grab ingredients.  Aiming to boil the potatoes tonight.  Maybe I shouldn't work too late so I don't have to do that in the dark?  Or I could go home and do that and come back here.  Or go see Knives Out or the Mr. Rogers movie.  (I did manage to see JoJo Rabbit finally the other day.  Recommended.  Not at all a laugh fest, but satirical in that highlighting-of-absurdity way, plus hard hitting.  And a great premise.)

Yeah, I guess working late is kinda silly, since I have plenty of leave, and feel like going ahead and getting started on the weekend.  I'll buy ice if the power outage extends a lot.  Never did shell out for a CPAP battery.  I coulda had one instead of the jumpsuit and shoes, but I have no regrets that way.  Maybe a CPAP battery for Christmas.  Or not.

Ya'll have a good one.