This isn't the tie I started putting on today.  That one wasn't tying right, and I was in a hurry.  So I grabbed this one, which I like a lot.

Tonight's my last sewing class.  I have a bow tie ready to sew that I'm hoping to run through the machine there.  All I really have left on my pants is hemming them, and then those of us with time are going to make an extra little not-make-up bag (me out of the same fabric the bow tie will be).  Meanwhile, though, this rerun. 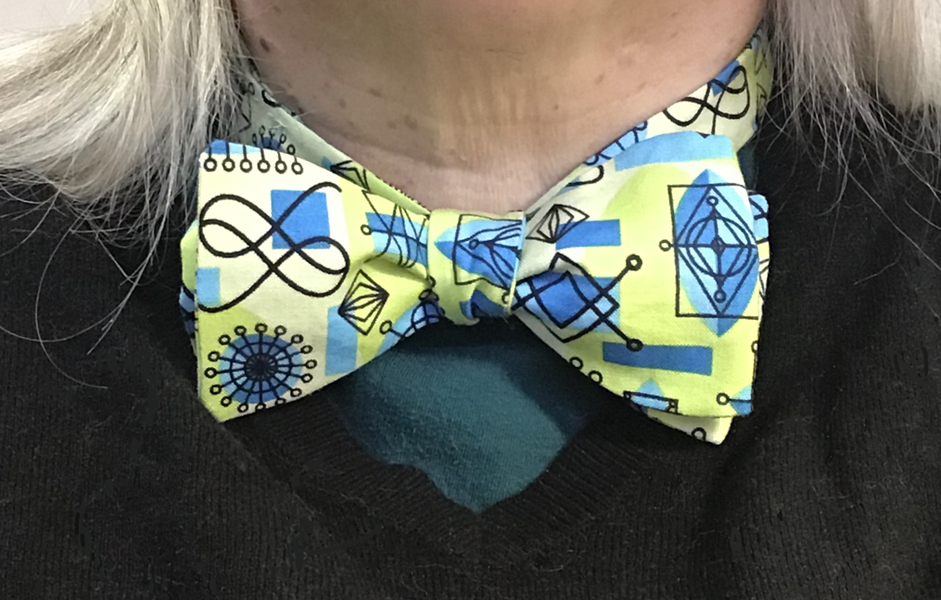 Well, in just a little more than 24 hours from now, Spring officially arrives.  5:58pm, my time.  There's still some snow piled up out at the corner, but it's mostly mud at my place.  There was a day last week when strangers were speaking to me on the street, cuzza our having in common the glory of it being nice out, and that was only a sorta-warm-ish-in-the-sun-anyway day.  It's exciting to be making it to another Spring, if indeed I do, and don't bet against me.  Bet against Kansas State, if you must, for their star player's foot hurts, doggone it (--- DOG--- get it?? ha ha ha) (yeah it was an accident), but your chances aren't good if you bet I won't make it to Spring this year, not to mention it'd be kinda rude for you to be betting against my continued existence, all the while enjoying these bow ties and postcards, to whatever extent you enjoy them.

My sewing-class drawstring pajama pants are a little big.  If I make 'em again I should downsize them.  The official sewing pattern is hard to read.  I think I'll need to do some studying up on how to read sewing patterns if I'm gonna keep sewing things other than bow ties.
Tags: btt
Subscribe