It's the first really warm day of the year here in SE Michigan USA North Amurka Earth.  Warm enough it was nice to get back into the cool house after taking the dog down the street and back.

My bow tie's so loose today that it keeps uncentering itself.  This seems right, cuz I feel sorta floaty and uncentered my own self.  Some kind of weird despair is hovering in the wings.  I have the impulse to lose myself in something, anything.  But not any more of these here galleys, cuz HO and HUM.  HUM and HO.  Boop-boop-ee doo. 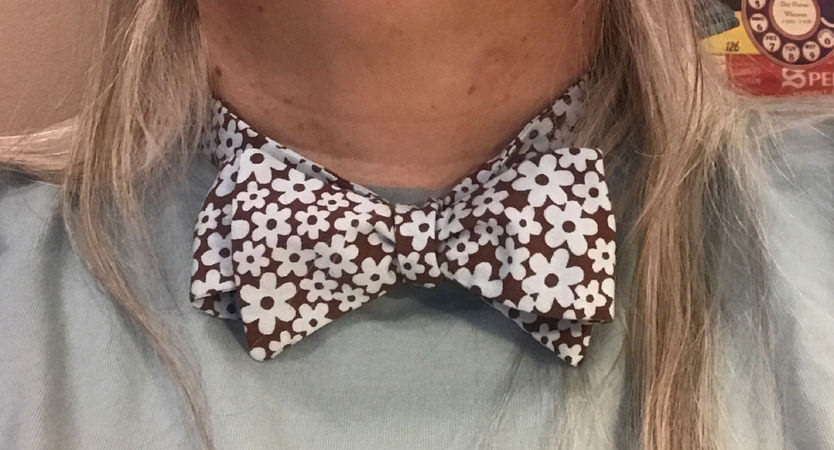 I went with flowers, cuz flowers.  This is the tie I lent Sunny the other week for BTT; I told her I felt like I was wearing her tie today.

Maybe I shouldn'ta talked to my therapist about my "higher power"–related resentments, after recently hearing several people attribute fortuitous things to their higher powers clearly being out there looking out for them like some magic guardian-angel supernatural-external-consciousness/entity-that-gives-a-shit-about-YOU.  It felt alienating, hearing those characterizations.  And today, somehow, it makes me feel, by comparision* (*which yes I know I shouldn't do but c'mon), like a cynic who causes her own unhappiness with her lack of faith (in what doesn't exist).

I feel like radical acceptance could be a higher power, if I had it.  It surely is higher than the power I seem to have on my own.

Do you know how to make vegan cheese?  You could find out at something called Penguicon:  Not Just Sci-Fi and Linux.  (Subtitle not really part of the name.)

At a nearby vegan place I believe they use butternut squash as the base of the cheese in their mac 'n' cheese.  It's pretty good.