Greetings, fellow humans, and a happy what's-left-of-Tuesday (or whatever the immediate time vicinity is when you read this) to you.  Since it's Tuesday, it's time for a bow tie.  Mine, not
Lurch's:

(I came across that gif when looking for a one with which to reply to Peter's comment on my recent "bears watching" postcard post.)

So here's what I'm sporting today, in the slightly cooler and gonna-rain come-down from a real Spring-type day yesterday:

For a slightly broader shot, with a broad, see
here--- that's Edith Head on my chest, pin by Kate Gabrielle: 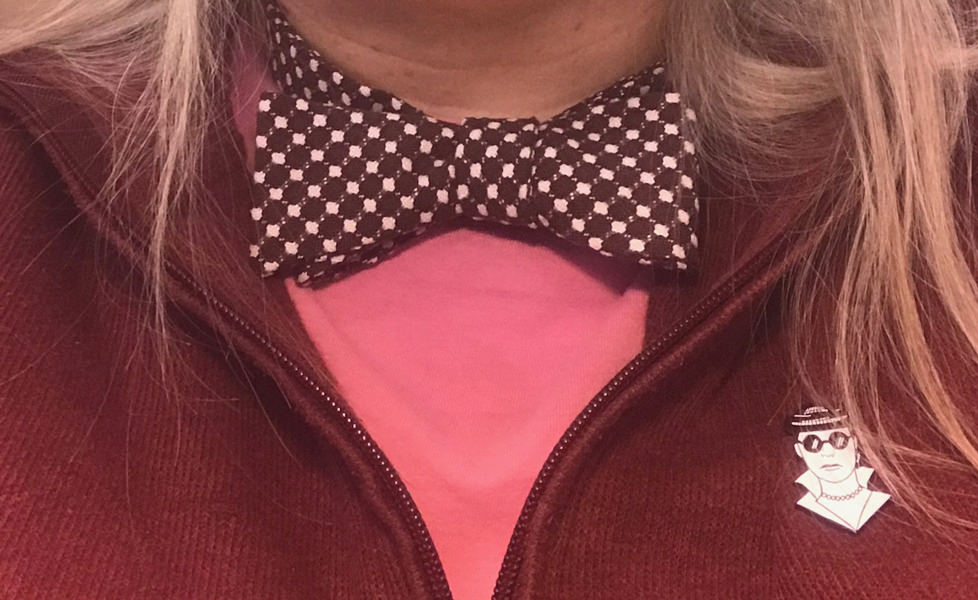 I'm gonna wait and try to contact the allergist I saw in 2016 before filling the ER's epipen prescription (or trying to get a free promo epipen-like device).  That's the decision I got to today.  It's beginning to look a lot like my anaphylactoid experiences may just remain idiopathic; the tryptase test I went through such hassle and cost to get in in the scientific-inquiry window of opportunity (in the middle of the night) after a relatively mild incident last week didn't show whacky elevated levels.  Gotta try not to beat myself up for going for it.

It sucks that insurance influences medical decisions.  We used to have pretty good insurance, but now we're high-deductible.  Pretty sure I'll be burning through the deductible faster than I can get contributions from my pay into the HSA.  Is it worth it to borrow money to boost the fund so the spending will be tax-free?  Seems like I've got some math to do.

So many little dreadful things to do to take care of myself and try to make my surroundings more pleasing.  It sounds like a pretty boring proposition, having such a focus, doesn't it?  It's the mission, though.  Other people do come into play in that focus, even tho it probably doesn't much sound like it.  In fact it probably sounds lousy to even think of other people as part of my surroundings.  They're definitely involved in my trying to take care of myself.

At chorus last night this one fella told me how he doesn't care about people any more.  He's retired, I guess you could say, and has never had a boyfriend, tho he's had his one-night stands, he told me the week before.  This week he seemed to be talking about all people, not just the men he might or might not be hooking up with.  I don't want to get to (or "end up" at) a point like that myself.  Yet I seem to have withdrawn from people, and/or been relegated to some antisocial (but not DSM antisocial) sort of state.  Am I not fit for human contact?  Maybe it sounds like a strange thing to think, or say, or wonder about, or believe down deep, but part of me really does figure (and not without plenty of evidence) that I'm not fit for my fellows.  I don't like how it feels to contemplate that possibility.  I contemplate it unbidden by my higher directive mind-spirit.  It stirs in me as a notion as if of its own accord.

Today's bow tie, btw, is more brown than it looks in the reflection/air of my red & pink clothes.  Here it is as pictured on the website from which I got it on "clearance" for $3 but now it's back to $20:

fflo for possible future bow ties I *made*--- tho that probably won't be next week, or the next week.
Tags: btt
Subscribe